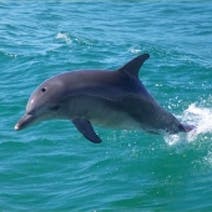 A STUDY has revealed the wealth of sea life off the coast of southern Spain.

According to the government report, the Mediterranean Sea and Atlantic Ocean of Andalucía has the greatest concentration of marine mammals in Europe.

The waters of Almería have the largest populations of both common and bottle nose dolphins. There are also important numbers of whales, such as the Long-finned pilot whale, Killer whale and the Humpback whale.

The study – which was done by the Ministry of the Environment and which used aerial photography to spot cetaceans, or marine mammals, as they surfaced for air – also revealed numbers the short-finned pilot whale, and other infrequent visitor to the Mediterranean, like the Blainville’s beaked whale and the Dwarf sperm whale – a whale which is rarely seen alive.

The Atlantic Ocean off the coast of Cadíz also has large populations of False killer whale (Pseudorca crassidens).

“This demonstrates the rich biodiversity found in the waters of southern Spain. The reserves of cetacean are important and we must protect our dolphins and whales from overfishing and pollution,” said Renaud de Stephanis, from the Spanish Marine Mammal Society.

Meanwhile, a separate study has shown that some species of sea life off the coast of Málaga is under threat of extinction.

The findings of the 2008 Junta de Andalucía report reveals that the Mediterranean of the Costa del Sol contains 61 animals that are classified as endangered.

Included in this census are seven types of sponge, 33 molluscs and 22 corrals.