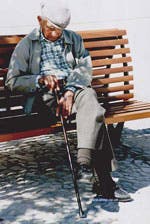 “IT is little more than a myth that is interesting from a tourism point of view.”

That is the opinion of a sleep expert after a survey claims that almost 60 per cent of Spaniards never take an afternoon nap.

The study by the government discovered that of the 40 per cent that do take a nap only 28 per cent choose to do so in bed.

The study also found that men older than 45 are the ones more likely to take the traditional siesta tucked up in bed rather than on the sofa.

“We need to start debunking this myth that every Spaniard takes a nap,” said FUNDEPS president, María Sáinz. “Today only a few people nod off after lunch,”

The research also surveyed the population’s sleep patterns, and the results show that only 68 per cent wake up in the morning feeling well-rested.

Some 18 per cent of those questioned said they normally feel tired and listless first thing in the morning, while 13 per cent had muscle cramps.

There were variations between the different regions of Spain, however. Galicians are the most restful, while those from La Rioja and Murcia had the highest numbers of restless residents.

Only 53 per cent of Madrileños said they feel energetic when they wake in the morning.