A DANGEROUS paedophile, who may be linked to the disapparance of three-year-old Maddie McCann, spent years drifting up and down the Algarve and southern Spain. 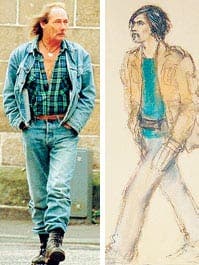 Raymond Hewlett, who has six children, mostly stayed at campsites on the Costa del Sol and Costa de la Luz, it is understood.

But it is his whereabouts and knowledge of the Praia da Luz complex in Portugal, where Maddie went missing on May 3, 2007, that has led to him being investigated over her disappearance.

Hewlett, who has a track record of sex offences against girls, has revealed that he knew the layout of the Ocean Club holiday complex well.

He also admitted that he had parked his van – a blue dodge – outside Maddie’s apartment ‘many times’ and was staying less than an hour from the resort on the day she disappeared.

Hewlett – who left Portugal for Spain, and then Morocco, “in a hurry” after the disappearance – has a striking likeness to a man seen walking away from the complex with a young girl under his arm on the night (see pix above).

He was spotted by Gerry and Kate McCann’s friend Jane Tanner leading to a photofit drawing being released to the press.

Now the McCanns’ investigation team wants to interview the 64-year-old in the hope he can shed some light on the disappearance.

“I have nothing to hide. I am willing to talk. I thought the Portuguese police closed this case long ago”

Hewlett, who is currently living in Germany, last night denied he was involved in the mystery. He said: “I have nothing to hide. I am willing to talk. I thought the Portuguese police closed this case long ago.”

It has emerged that Hewlett was based in Tavira, on the Spanish border, and then in Spain for much of last year.

A former soldier who lived with Hewlett on a campsite in Morocco from May to August 2007 told the Sunday Mirror he admitted parking a van close to the McCann’s complex on several occasions.

Peter Verran, 46, said: “He brought Madeleine up straight away. He went on and on about the McCanns. He said his three-year-old daughter looked like her.

“He was worried that because there had been reports that Madeleine may have been spirited away to Morocco, people might think his child was her.

Then he suddenly said, “Madeleine’s not in Morocco”.

“I asked him what he meant and he said he knew Praia Da Luz really well.

He knew the Ocean Club complex where the McCanns had been staying. He said he’d been there many times and had often parked his van close to the apartment.

“He said he knew the layout of the place, the flat and the restaurant where the McCanns and their friends had been eating when Maddie disappeared.

“He had a lot of detail. He said there was no way that the child could be taken without the parents seeing. He said they were lying.”

Hewlett had been apparently been ‘lying low’ at the campsite in Chefchaouen, in the Rif mountain.

According to Verran, in that time he only saw Hewlett leave the campsite once or twice. “He was never short of money though. I don’t know where he got his money from. He said he’d made cash from car boot sales.”

Hewlett told another couple that he was approached by some ‘Gypsy tourists’ in Portugal offering to buy his daughter just before Madeleine went missing.

They also recalled him mentioning a ‘business’ trip to Morocco, where there were several alleged sightings of Maddy after she went missing. UK-born Hewlett, a former soldier who previously lived in Blackpool, is being treated for throat cancer in hospital in Aachen.

He was jailed several times for sexually assaulting young girls and was once on Crimestoppers list of Most Wanted paedophiles.

Described by a judge as “extremely dangerous” he is now wanted for questioning by British detectives in connection with a separate indecent assault.

The McCanns hope that once officers from West Yorkshire Police have questioned Hewlett, who are currently in Germany their own investigators will speak to him.

Have you seen Hewlett or met him?
Call the Olive Press on 951 166 060 or email jon@theolivepress.es