AT 200metres in length it is the biggest ship in the British navy.

So it was difficult to miss HMS Ocean when it docked in Malaga this week.

The modern ship was spending three days in the city, as part of a three week exercise concentrating on people and drug smuggling around the Meditteranean.

But it also served as the ideal launch pad to officially welcome new Consul to the city Steve Jones, as well as being one of the last ports of call for outgoing British Ambassador Denise Holt, who is retiring after 40 years of service.

In referring to her time as a diplomat, Holt said it was “actually 60 years, not 40”, since she had been born into a family of diplomats.

Consequently, she is looking forward to retiring in October to her country of birth and getting to know it a bit better.

She noted that she had first visited Spain in 1968 and found it to be a “threatening” place, with Franco still ruling with an iron fist.

“Now it is a delightful modern European country, which until the economic crisis came along, had been very prosperous,” she explained.

She added that in terms of trading partners Spain was one of the most important having invested more money in the UK economy in 2007 than any other country.

She also explained that her department had now added two more honorary consuls in Jerez and Almeria, to add to the already existing ones in Sevilla and Granada.

“The modern ship was spending three days in the city, as part of a three week exercise concentrating on people and drug smuggling”.

They give their services voluntarily and unpaid but are the local eyes and ears of the Consul, “helping out when needed,” she said.

HMS Ocean has been on a six month tour of duty spending time in the Far East as well as investigating piracy around Somalia.

In particular, it has been looking at drug smuggling around the Meditteranean trying out a new hi-tech MX15 camera.

The camera, which has a range of up to 12 miles can monitor drug or people smuggling from a long distance away in preparation for later prosecution.

“It can give a great pattern of life, which the intelligence guys are after,” said HMS Ocean spokesperson Dave Pickles.

Teaming up with the UK’s Serious Organised Crime Agency (SOCA), officers were looking at patterns of smuggling.

They are particularly interested in how increasingly large amounts of heroin are now being smuggled from Afghanistan along the north coast of Africa and into Spain from Morocco.

“Gangs are finding this route often easier to smuggle drugs that going through Turkey and Eastern Europe,” explained Pickles. 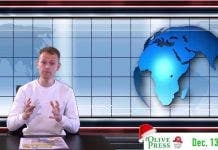