WITH 70 British pubs, ten fish and chip shops and cheap sangria by the gallon it is not apparently the perfect destination for romance.

But Benidorm has been voted one of the romance capitals of the world this Valentine’s Day, a UK poll reveals.

He said: “Demand has been really strong for short city breaks, with Rome, Paris, Prague and Amsterdam following hot on the heels of Benidorm.”

According to Professor Duhamel, from the University of Angers, Benidorm was an “unknown cultural gem”.

“Benidorm is the Dubai of Europe and this city deserves to be presented as a candidate to UNESCO,” he added.

Formerly a peaceful fishing town Benidorm has been transformed over the last 50 years and now counts on 600 bars, with 500,000 Brits a year visiting and even a Johnny Vegas sitcom

Tourists in Spain’s Benidorm and Costa Blanca fined up to €700 for disobeying coronavirus lockdown as police crackdown on notorious ‘English zone’ and ALL... 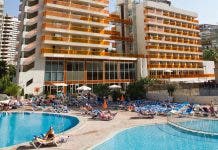