GAUCIN has long been one of the hippest places to live in Andalucia.

A select holiday spot for the likes of the Sainsbury family, Fatboy Slim and allegedly once Princess Diana, it was also recently joined by none other than beleaguered BP boss Tony Hayward, who has bought just outside the town. But a lot of people will probably want to keep that quiet.

All in all around 300 to 400 cultured expatriates live in the stunning mountain town, which perches on a rocky outcrop at the end of the Genal valley and is often – understandably – termed the ‘Balcony of the Serrania de Ronda’. 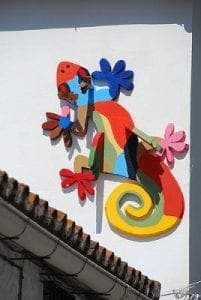 A varied mix of northern Europeans – many of them artists, photographers and writers – they have been joined by an influx of intelligent Spaniards which gives the town a distinctly creative and prosperous air.

So organised are the dozens of artists who live here, that they organise an annual open day of their studios every Spring to show off their work.

Take a walk around the town and you will see, not only hundreds of geckos lining the walls (a local artist initiative), but increasingly Gaucin’s creative residents are displaying papier mache cats in a range of bright and distinctive colours.

An even newer initiative – again via a local resident impulse – has seen a series of fabulous plaques going up on the walls explaining the various birds to be seen around the area.

It is this creativity that makes Gaucin really stand out and while it may be only 30 minutes from the Costa del Sol in the car, it feels a million miles apart in spirit.

It may not have the attractions of the coast below, or the key tourist sites you find in nearby Ronda, but what it does have is a raw beauty and unspoilt countryside that sucks you in.
Small enough to remain untroubled by supermarket chains (one of its best food shops Pura Vida is strictly organic, local produce) you can’t even get an English newspaper. Oh! apart from the petrol station on a Sunday when mysteriously The Sunday Times and co appear, as if by magic.

There are however, plenty of fantastic bars and restaurants and the narrow streets and shady squares are a great place to hang out in summer.

Wander around and enjoy the jumble of whitewashed houses lorded over by the historic Arabic castle the Castillo del Aguila.

It’s worth a stroll to the top for the views, but try and ascertain if it is open in advance, as opening hours are said to be erratic.

Then take a ride out into the nearby countryside, where there are a host of excellent hotels and restaurants for a meal or somewhere to lay down your head.

Even better, get up early and take one of the superb walks that head in circular routes around the town. The countryside here is some of the best in the region and views are not in short supply.

The history of Gaucin is fascinating and pretty turbulent by anyone’s standards.
Archeological remains indicate settlement here right back in pre-historic times.

Subsequent ‘visits’ by, among others, Iberians, Phoenicians, Romans, Visigoths, Moors and the French have all contributed to a troubled history for the village.

The town’s position at the head of the Genal valley always made it subject to frequent attack.

Yet these invaders, together with the ’invasion’ of northern Europeans in the last few decades, have all helped to weave the rich tapestry that is modern-day Gaucin.

According to mayor Francisco Ruiz the foreigners have integrated well over the years and are well liked and accepted by the locals.

“We have few problems between local people and the foreigners who either live here permanently or who visit as tourists,” he says, continuing: “The Spanish understand and appreciate the wealth the in-comers have brought to what was a fairly run-down hill village in the decades following the Spanish Civil War.”

But one thing is for sure, these newcomers are no trailblazers. Gaucin has been watching foreign tourists – and particuarly the British – come and go for centuries.
Gibraltar was the key to Gaucin’s early popularity with the British.

From the late 18th century, many of those whom the Empire had dispatched to the Rock chose to spend their summer breaks in the cool of the mountains and away from the claustrophobia of Gibraltar.

Ronda was a favourite destination, which led British engineers to be commissioned to build a railway from Algeciras all the way to Ronda in the late 19th century, stopping conveniently in Gaucin.

But, even before then a famous hotel, the Hotel Nacional, was putting up tourists inside its historical four walls.

Run by a popular local figure Dona Clemen, it became an institution and only finally shut half a decade ago.

Previously known as the Hotel Ingles it is appropriate that the visitors book was dominated by British comments, such as one by a Royal Artillery captain, who wrote that he was “satisfied” with his stay in 1882.

I was certainly satisifed too after a whistlestop 48 hours in the town.

While a frequent visitor from my nearby home in Ronda, I decided to stay over a night in the stylish Hotel Fructuosa, which was recently included in a poll of Europe’s best 100 hotels.

That evening I strolled around – as Holland beat Uruguay in the World Cup – taking tapas in a range of different bars and restaurants, each one varied and, it being July, busy.

It was a hot and buzzing night and the town was truly alive with the sound of Spanish and foreign accents.

The following morning I got up and followed the geckos around the town, making sure to keep my eyes peeled on every street and corner.

A superb initiative, the bright and colourful creatures, also known as salamanders, clearly sum up the style and creativity of the town. I’ll be coming back soon.