STEPPING off the train in Granada, you walk straight into the world of Max Romero, the hero of P.J Brooke’s new crime novel series.

And as I went to meet its authors – the fascinating husband and wife team of Phil and Jane Brooke – I couldn’t help but feel that everything was spookily familiar.

After all, the cafe Via Colon where I first met the couple is the setting for the opening scene of their second novel A Darker Night, and everywhere we walked I kept noticing familiar names and places. 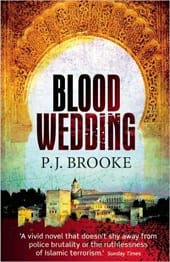 They have truly brought the evocative Andalucian city to life and as we snaked our way up into the narrow streets of the Albaycin, where the couple live, I felt myself slipping further into the fascinating world of super-detective Max.

“That’s because everything we do, everywhere we go, and even the wine we drink goes into the story somehow,” explains Phil, 67, a former lecturer in Latin American Studies, originally from Southend-On-Sea.

Writing as a couple is an almost unique set-up, but strangely, it seems to work for Phil and Jane, a former town planner in Glasgow.

It would not suit most couples, but the proof, of course, is in the pudding, and they are now close to completing the third book in the series, which is published by one of the UK’s oldest publishers Constable and Robinson.

“We’re still married – just,” jokes Phil, a rather jovial chap with a penchant for all things Latin American.

“Jane may look sweet, but she is actually very stubborn and you need good negotiation skills to work with her!”

The couple have been writing together for five years since they moved to Granada from Glasgow, where they both previously worked and were active members of the Scottish Green Party.

Never having heard of a husband and wife novelist team before, I was intrigued to find out how it all worked

“I started writing on my own, but Jane kept looking over my shoulder and we soon realised that it would be better if we worked as a team,” explains Phil, sitting on the terrace of his charming home, overlooking the Alhambra Palace, one of the world’s most evocative buildings.

Never having heard of a husband and wife novelist team before, I was intrigued to find out how it all worked.

As Jane, a festival-lover whose enthusiasm is infectious, explains: “Well, I am better at all the little details that bring the book to life.
“Things like the clothes the characters are wearing and the things they say,” she adds. “That is my area.

“So, Phil writes the first draft of the chapter with the main plot and background, and then I come in and add the dialogue and detail.”
Research-wise, the couple use their own experiences as the basis of their plot.

“To start with, we talk about what we might write about and bat around some ideas,” says Phil.

“Back in Glasgow we had a large bath in our house and we would spend many hours brainstorming ideas there – until the water went cold!”

But now, the duo have to settle for their garden terrace overlooking the majestic Alhambra, a spot where they spend many an hour discussing ideas over a bottle of wine.

It is no accident, of course, that this is the exact same view Max Romero gazes out on after a hard day of murder investigation.

“We did have a debate about whether we should change the place names, but we decided to keep them in to give the books more colour,” explains Jane, who was born in Yorkshire.

Indeed there is only one exception, with Max, the hunky Scottish-born detective working for the ‘Diva’ police force, which is actually Orgiva in the Alpujarras.

As Phil explains: “The police in Orgiva were very helpful and gave us lots of background, and the place itself gave us inspiration for the town of Diva.

“We used to own a house there – well it was more of a shack – and that was the inspiration for Max’s country cottage.”

The couple have been married for nine years and met in 1995. They only began writing once they had retired, although Phil wrote several social science books during his time as a lecturer at Glasgow University. 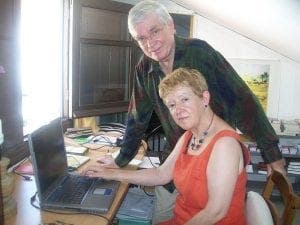 “I find writing therapeutic so I took some creative writing classes back in Scotland and I actually had classes with Val McDermid, who wrote the book behind the TV series Wire in the Blood,” says Phil.

Now working on their third book, Death’s Other Kingdom, the pair are becoming old pros at writing and, thankfully, the books are selling well.

But Jane says they were not without a few teething problems.

“It was a shock to the system to have to write to order for A Darker Night, after spending a leisurely five years on Blood Wedding,” she explains.

“We really were writing against the clock and had to get it finished in a year, but we managed it.”

The couple say the best thing about their novels is that they are much more than simply fictional stories.

Better than any guidebook, the series is a superb advert for Granada, and the pair have done extensive background reading to make the novels factual as well.

“Phil has done a lot of research around the history of the area and of writer Lorca, which forms each story’s sub-plot,” says Jane.
“Max’s favourite wines are also our favourites and they all come from the three wine-growing areas in Granada Province.”

What sets this crime-writing team apart from many of their counterparts is that their stories evolve as they are written, incorporating real-life events.

Phil says: “A Darker Night is based around local government corruption and money laundering, and for this we actually got a lot of our facts from The Olive Press.

“The purpose of the books is to illustrate that the past really does influence the present and there’s no getting away from it.

“We also think the balance of Max’s work life and home life is important, something which is so often forgotten in other crime novels where the reader only sees one side of the character.

“We wanted to break that image of the gloomy, alcoholic, chain-smoking detective.”

With so much of their own life mirroring the characters, it is quite logical that most of the characters the couple create are based on people they know. They don’t deny it.

So much so that it even made me wonder whether I could expect to read about a young journalist who visited the Albaycin on a sunny day in August in a future book.

Either way, after an afternoon on their stunning terrace overlooking the Alhambra, I certainly felt like I am a part of Max’s world already.

FROM THE ARCHIVES: Superstition emptied a Spanish village in the 14th century before turning it into a must-visit festival

Christmas in Spain: Ten books to cosy up with this winter