A LETTER written by Britain’s greatest naval hero just four days before the battle of Trafalgar – where he died – has fetched an amazing 40,000 euros at auction.

The note, dated October 17, 1805, went for three times its estimate at the auction at Sotheby’s, in London.

Written to the Governor of Gibraltar the never-published letter reveals something of the Admiral’s fighting spirit.

In the letter, Nelson confides to Rear Admiral John Knight that there is a shortage of drinking water aboard the HMS Victory but warns “keep this news to yourself or we shall see it in an English newspaper”.

He also reveals he is “anxious for an Easterly wind” that would encourage the enemy to leave the port of Cadiz and face the British fleet. 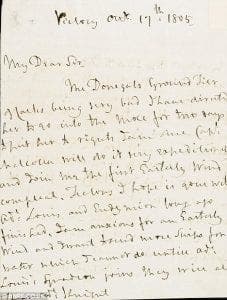 As history reveals his wish was soon granted and French Admiral Villenueve raised the signal for his ships to leave Cadiz.

On the morning of the clash, just off the Cape of Trafalgar, near Vejer, Nelson famously inspired his troops with the immortal
words “England expects every man to do his duty”.

And despite being outnumbered in terms of both ships and men, the British triumphed in the most famous sea battle in history.

Nelson was, however, fatally wounded during the battle on October 21 and his body was received 10 days later by Admiral Knight in Gibraltar.

Now, Nelson’s first and most prized honour, the silver, gold and enamel breast Star of the Order of the Bath is also being put up for sale by a direct descendent of Admiral Keats, Nelson’s friend and confidante.