IT could hardly have come as a surprise if you had been pickpocketed in Grazalema at the weekend. 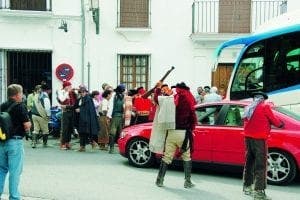 The town was the setting for the annual meet of bandoleros – or bandits – from around the region.

Now in its fourth year, a band of bloodthirsty brigands roamed the streets pulling people from their cars to demand money.

The same group even ran over and encircled a group of tourists at gunpoint as they got off their bus from Cadiz (see picture).

Of course, this was all part of the weekend, when the town turns itself back two centuries to the year 1832. As well as a string of knife fights between actors there was a constant battle to put infamous bandolero ‘Jose Maria el Tempranillo’ behind bars.

Some 20,000 people visited the town over the ‘Blood and Love in the Mountains’ weekend.