POLICE have finally clamped down on a Turkish property scam exposed by the Olive Press earlier this year.

The paper understands that one of the scheme’s kingpins – New Zealander Lionel Andrews – has been arrested in Calpe, Alicante, during a nationwide swoop.

It means the noose is now tightening on his brother Nigel Andrews and his British wife Margaret ‘Mags’ Andrews, who vanished from their Marbella offices in June, allegedly taking with them investors’ deposits.

An Interpol arrest warrant has been issued for the couple, who the Olive Press, believes have fled to the Algarve.

Police in Turkey and Spain estimate the Andrews clan took up to a million euros in deposits for non-existent properties on Turkey’s Mediterranean coast.

Among those losing money was a leading solicitor, as well as victims in Ukraine, Ireland, London and Luxembourg.

Police in Alicante and Marbella confirmed they had arrested a New Zealand national in connection to the Royal Resorts Turkey scheme.

It comes just weeks after we traced former MRI salesman Nigel, 51, and ‘Mags’ to a new home in the coastal town of Almerimar, in Almeria.

The couple have been ‘living the life of Riley’ in the exclusive marina, which is Almeria’s equivilent of Puerto Banus.

“They had quite a bit of money which they said they had made in Turkey,” revealed one local source, who asked not to be named.

They regularly boasted to regulars in the expat Ankara bar about their ‘successful Turkish operation’. 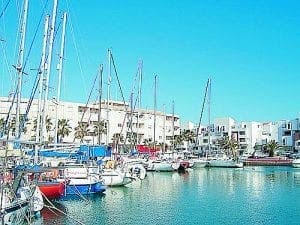 “They didn’t want for much and had this lovely new house and bragged about its incredible walk-in shower,” he said.

The pair, who are both allegedly black belts in karate, drove a brand new BMW X5.

But this luxury allegedly came at the expense of dozens of victims, believe Spanish police.

The group set up front companies in upmarket venues such as Marbella’s Guadalpin hotel, before disappearing overnight owing rent.

The Olive Press can confirm that Andrews and his team fled to Almeria in June leaving an unpaid month’s rent on the office in Bulevar Principe Alfonso Von Hohenlohe.

Auckland-born Andrews then changed Royal Resorts Turkey to a new company called Property Investing Overseas.
One person who got burnt by the scam was expat Tony May, 69, from Alora.

He told the Olive Press he was ‘gutted’ after he and his wife Andrea, 41, paid a 70,000 euro deposit on a property in Kusadasi.

But the resort never went ahead as Royal Resorts neither owned the land nor had planning permission.

“I am overjoyed that police are finally clamping down,” he said. “It is thanks to papers like the Olive Press that we have had this success.”

Perhaps sensing the police were already closing in, when our reporter rang their bell at their Mirador urbanisation, in Almerimar there was no reply.

A neighbour explained the couple had apparently recently ‘moved to Portugal for a job’. 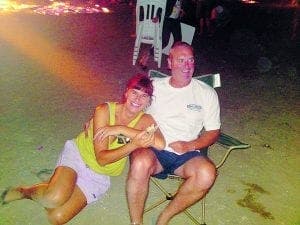 However, Tony May is certain that they are soon to be picked up. “The police are searching for them.

“They can’t really move. If they go to an airport they will be arrested. And they can’t come back to Spain.”

But life on the run, as it turns out, is nothing new for Nigel.

His first flight from the creditors dates back to 2003, when he fled to Spain from Scotland where he lived for many years with nearly 1.1 million euros of debt to his name.

Together with his brother Lionel, Nigel ran an Aberdeen nightclub Vaults into the ground only five months after the opening, leaving a trail of unpaid bills.

“There is a big group of people in Aberdeen that is also looking for them both,” added May.

While in Spain Nigel has worked for Darragh MacAnthony’s ailing property firm MRI, which is now being investigated for allegedly defrauding hundreds of its customers.

Dilip Kuner - 27 Jan, 2023 @ 12:45
IF you are looking for a bargain property in Malaga province, head inland. Sierra de Yeguas has been named as the cheapest municipality for real...