A 13-year-old girl has been found murdered with a plastic bag over her head in the small village of Arriate, near Ronda.

The badly beaten body of María Esther Jiménez Villegas was discovered in the pump house of a swimming pool at 19:15 last night by a fireman, in the area known as La curva de Arriate.

Sources close to the investigation have revealed it was a violent death with the face of the teenager barely recognisable.

The teenager had been reported missing at 21:00 on Wednesday night by her mother, and friends had been helping in the search.

The Olive Press, which has its main office in the village, can reveal that Maria was last seen with a friend in a four wheel drive vehicle close to the Arriate rubbish tip.

She was wearing a stripped grey t-shirt, jeans, and black shoes with pink laces.

Local sources revealed that the teenager who often went out alone, was “incredibly friendly”.

She had a younger sister and the family had lived in the village for five years.

Today all schools in the village are closed and the Town Hall has organised a gathering this evening to pay tribute to the young girl and show support for the family. 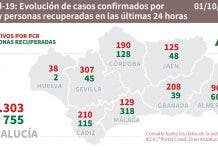 Cristina Hodgson - 1 Oct, 2020 @ 14:15
In 14 countries across the EU, private individuals and/or circuses can still keep tigers. Both scenarios are permitted in Spain.