HAVING trained at the two Michelin-starred Hotel Bristol in Paris, Jerome and his wife Haby know a thing or two about cooking.

But opening their stylish restaurant Boka in the depths of recession was a brave move to say the least.

The good news is they should just about pull it off, if the quality of the food continues to match the beautiful decor and enticing wine list.

But it is nothing short of incredible the number of new restaurants that have opened in the upmarket enclave of Sotogrande over the last few months.

Boding well, for at least the top end of the market, there are no less than three fabulous new spots that would do well in most parts of the world.

The trio of Boka, Salsa and Mara have re-energised the restaurant scene in the area, while, three others – Los Canos, Lombardos and a Japanese, Tengoku – just get better and better. 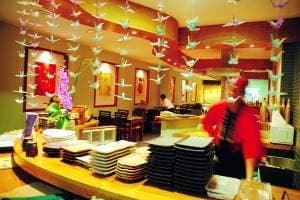 I was in the area doing inspections in preparation for a new restaurant website the Olive Press is launching next year.

As well as visiting a couple of well-established stalwarts, including Midas, the Hairy Lemon, Ke bar, and the latest addition to the Terra Sana chain, I wanted to find the most exciting new spots.

Salsa, in Pueblo Nuevo de Guadiaro, just outside Sotogrande, is one of those places.

With a chef (Matthew White) who’s knocked out 2000 covers at the Waldorf Hotel in London, serving up top quality cuisine shouldn’t be too hard.

Now having teamed up with sommelier Dennis – a former maitre’d from the celebrated French Horn on the Thames – as well as bon viveur Eugene, a local dentist, they are ticking all the right boxes.

A free glass of sherry on arrival – and even a tapa between 6.30pm and 7.30pm – immediately puts the diners in a good mood.

But the restaurant/wine bar is a novel idea; the place also doubles up as a kind of wine shop, with a huge range of interesting gems.

The menu is decent with some top quality cheeses and Jamon Iberico on offer.

I particularly liked the Argentinian steak with ‘monkey-gland sauce’ and Puchero croquettes made from a stew of chicken, beef, pork and potato.

The fact that you could get a bottle of Chateau Yquem on the wine list – even if it was 120 euros for a half bottle – was a boon.

“We make a point of buying as locally as possible and fresh by the day,” explains White. “The menu will be changing by the season and vegetables will be fresh and not stewed to smithereens like so many Spanish chefs do.”

Named after his mother, who works in the restaurant four days a week, you would be hard-pressed to find a better range of fresh fish anywhere in Andalucia.

It certainly helps that Alvarez’s family own a fleet of fishing boats – not to mention a string of fish restaurants in Sevilla.

And naturally you see a huge, healthily-stocked tank full of lobsters and other delights, as well as a display of the day’s catches.

But it is the elegant décor that straight away catches the eye. Everything from the colourful hydraulic floor tiles to the hip overhead lighting has been carefully selected.

The list of seafood is nothing short of extraordinary with such delights as Percebes (barnacles) from Galicia, super fresh clams and a type of sea snail called canaillas, which translates as ‘grooved carpet shells’.

I particularly liked the fact that you could order a mixed plate of fried fishserved up on one big platter, while the succulence of the blue fin tuna sashimi, with soya and mayonaise blew me away.

“We lightly sear it for a few seconds before putting it in a marinade of fresh lemon, thyme and other spices for four to five hours,” explains Ivan. I will definitely be back.

Another place I cannot wait to come back to is Boka, where Jerome and wife Haby – who are both cooks – offer a short, but well-planned and enticing menu with true Gallic flair.

Carefully choosing a range of superb ingredients – including tomatoes and spices from Ronda, no less – the risotto, Jerome learnt to cook at Hotel Bristol is a true crowd pleaser.

There is plenty of inventiveness with a gazpacho of courgette, for example, served with almond pannacotta and rocket sorbet, while a Yakitori duck fillet comes with shitake mushrooms and pak choi, one of the only places I have eaten it in seven years in Spain.

Best of all though, is the mouth-watering wild sea bass, served in a celery, wild fennel bean and shellfish stew. “We cook it at a very low temperature and reduce the stock for hours,” explains Haby, who is originally from Burkino Faso.

It was simply delicious and only matched by my pudding of pear and apple Tarte Tatin, served with caramel crunch and ice cream.

The wine list deserves a special mention with some classic French chestnuts including a 2007 Crozes Hermitage… and best of all, one of the secrets of Sauternes, the joyous Chateau Ramond-Lafon.

Just as exciting was a trip to what could be one of the coast’s best Japanese restaurants Tengoku.

Having run a successful restaurant in Abu Dhabi – apparently the first of its kind in the Gulf – its owner decided to try her luck in Spain.

It is a testament to the quality of her food that it’s been open now for three years, while restaurants have folded all around her.

I was particularly taken by the delicious spicy Japanese dumplings, known as gyoza in a dipping ponzu sauce, while the ‘exotic rolls’ were exactly that.

We tried two of the restaurant’s trademarks – ‘Caterpillar’ and ‘Motorola’, the latter, a deep fried slice of spicy tuna sushimi topped with avocado, tobiko and kabayaki sauce.

Just when I thought my night couldn’t get better out came the black cod.

Not on the menu and only flown in fresh twice a week from Japan thanks to the demands of two local Russian families, it was almost the best fish I have ever tried.

Literally melting in the mouth, it had been seasoned to a tee and was completely delicious. At 26 euros it was pricey, but well worth every centime.

Finally, to continue our Eastern side trip we were served the tempura ice cream; vanilla ice cream rolled in sponge cake and dipped in butter.

Basically an upmarket version of the ‘arctic roll’, we needed the pot of green tea to let it all settle down nicely. 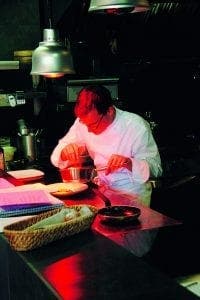 If you are looking for something good in the port, you must also make sure to try the Hairy Lemon, which has been open for nearly a year and has a highly-rated menu.

Busy for most of the week, it is also a great place to get a few beers or a glass of wine and open up your laptop, for its free wifi access.

And then there is Lombardo’s, a traditional Italian restaurant established in 1989 by Enzo and Sara Lombardo.

For over 20 years they have offered excellent Italian cuisine and wines and the restaurant is well known for offering fresh food with most of its vegetables being grown in their garden.

Equally charming, is the fabulous Cortijo Los Canos, an ancient farmhouse, which is easily one of the most romantic places to dine on the coast.

Candlelit in the evening, the menu is an inspired international/Spanish mix and the wine list, while short, is perfectly adequate.

It just summed up what a terrific range of places Sotogrande and its nearby satellite town of Pueblo Nuevo is offering to diners.

Now make sure not to pass the port on your next trip along the coast.