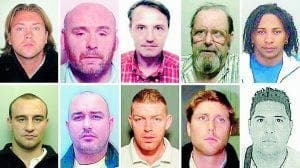 By Wendy Williams and Jon Clarke

HE is the grandson of former British gangster Mad Frankie Fraser.

So is it any surprise that Anthony Fraser has ended up on the UK’s Most Wanted list.

His name has been included on the latest Crimestoppers campaign to find wanted criminals hiding in Spain.

The 39-year-old is being sought over an alleged drug-smuggling plot in 2009 and is believed to be hiding out on the Costa del Sol.

An Olive Press source revealed that he had been living in a house in El Faro and was occasionally seen drinking in the Lounge Bar, in Riviera, where teenager Dan Smith was shot last year.

“He was definitely in and out of various pubs and cafes in La Cala as recently as a year ago,” said the source, who asked not to be named.

“He was living around El Faro, but I have been told he has scarpered up the coast towards Alicante as the heat got turned up.”

Fraser had first disappeared after two tonnes of cannabis worth over five million euros was found hidden in a truck full of frozen chickens in Essex in 2009.

Nine other fugitives – including Darren O’Flaherty, the prime suspect for the murder of Irishman John O’Neill last summer – are also listed in the latest Operation Captura campaign.

First launched in 2006, Operation Captura has now seen 38 out of 50 fugitives caught and returned to the UK.

According to Ken Gallagher, SOCA’s Head of European Operations, the success of the operation is entirely down to the public who have shown a great desire to help.

He told the Olive Press: “The last time we launched one in Alicante we found someone within hours of making the names public and we went on to find eight out of the ten on the list.

“These fugitives are wanted for murder and sex offences, and they represent a threat to society. We are anxious to get them back in custody in the UK.”

He continued: “The message we really want to send to these fugitive is that you can and will be caught. And the public can be confident their identity will not be revealed if they contact us.

“They should also know that when we are given a lead we make sure we get the right person, we don’t just swoop in, so if they suspect someone, even if they are not sure, it should be reported.

“I hope we can catch someone within hours again this time.”

Details of all 10 men have now been posted by Crimestoppers on a most wanted website.

Email jon@theolivepress.es  if you have any information.