I’VE often been told about the passion and the power of flamenco but, to be honest, I’ve never really felt it.

Of course, I’ve admired flamenco artistes for their skill and creativity.

I’ve been wowed by a juerga in Barcelona, where street performers demonstrate their organic rhythm and passion, hand drumming on a simple cajón and dancing on a broken piece of chipboard.

And I’ve watched typical “tourist” flamenco shows in Seville, where the cantaores take it in turns to showcase their vocal talents while the audience is served a selection of dodgy food and overpriced drinks, and where the dancers wear dresses from which even the brides in My Big Fat Gypsy Wedding would be proud to wear the scars.

But then, it got me. Flamenco hammered itself into my heart and my soul in one evening. Well, “That’s a bit dramatic!” I hear you cry. You should have been there…

I was coerced into attending a “flamenco show” by my spanophile mother who likes nothing more than to engross herself in all things Spanish. My other half and my Dad were also dragged along for the ride – fairly willingly, I should add. 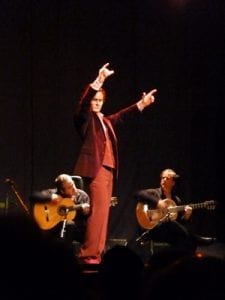 In typical English fashion, we politely queued outside the venue, having arrived early to bags our seats. We watched as true Spaniards armed with pointed elbows gently pushed past us to get to the front of the queue, cleverly avoiding eye contact with those waiting and instead waving at fabricated relatives waiting for them near the door.

When the doors opened, we bustled in with the best of them and made claim to our seats, just a few rows back and over to one side affording us an easy exit if necessary. This was much to the chagrin of my mother’s Spanish friends who had allegedly pushed through in order to save la inglesa and her family the best seats in the house, or so they thought.

We sat there for a while listening to the general chit chat and salutations around us. My other half made himself comfortable, expecting to snooze for the next hour or so, while my Dad and I caught up on all the news. And then, all of a sudden, we stopped talking and even Dad sat bolt upright…

The show had us all jaw droppingly captivated right from the start. This wasn’t a typical Gitano gypsy improvised show put on for the tourists with a slow build up and particular focus on the singers – this was an emotionally intense professional dance performance with fantastic accompanying singers and musicians.

The story was incredibly easy to follow, even for non Spanish speakers, as the singers and especially the dancers, exuded emotion while they told the story with their faces, music, costumes, props and movement. They wrapped themselves in black shawls to portray grief and misery, celebrated happiness by kicking up the colourful trains of their dresses and etched both pain and elation on their faces to tell the tale. 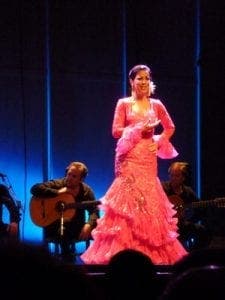 The show, set in 1936, was created by its principal dancer, Luisa Palicio Martín, who was born and bred in Estepona, based on a story written by David Montero. Luisa played a girl completely smitten and enjoying the giddy rush of her first love. Just after their engagement, her beloved, portrayed by David Pérez, is called up to serve in the Spanish Civil War.

While he is away fighting, she puts her life on hold and vows to wait for him, everyday pining and fearing for his safely. Happily he survives and returns home but the story does not end there. Emboldened by his military experience, her beloved decides to spread his wings and ultimately marries another girl, leaving the protagonist feeling bereft and hopeless. All is not lost as she defies the more typical fateful ending favoured by flamenco and starts a new and happier life for herself, away from the man who broke her heart.

Once I got over the fact that her love interest was the spitting image of David Tennant in the midst of a Doctor Who crisis, I became completely absorbed in the story. In much the same way that a powerful opera sucks you in even if you don’t understand the words, this performance had us guiris sitting there mouths wide open. And although we were still too reserved and English to do so ourselves, I got such a kick out of seeing the Spanish men in the audience getting so passionate and fired up by the music and dance that they just had to spontaneously stand up and shout out their approval.

Look out for further performances of Primer Amor later in the year for a real education in authentic Spanish flamenco.

Cristina Hodgson - 7 Feb, 2023 @ 10:00
THE magical mountain-top city of Ronda has been named ‘the most romantic city in Spain’ by the popular royalist weekly magazine, specializing in celebrity...