LAST week I was thrilled to support the El Paraiso Amateur Traumatic Society by watching their stage version of Robin Hood, Men (and Women) in Surgical Stockings, twice!

Each year, a group of El Paraiso Golf Club members, together with a few (brave) friends, work incredibly hard to put on an original production in support of their chosen charities Aspandem and Cudeca. The cast chose to dedicate their performances of Robin Hood to Charmaine Spencer, an avid participant in previous productions and tireless worker for Aspandem, who sadly lost her fight against cancer last year.

This year, the Traumatics were assisted by Rob Humphries and Stuart Hooper who wrote a very amusing and topical script, full of “in jokes” which had the audience in stitches. All three nights were sold out but I was lucky enough to watch the first and last nights.

Right from the off, the audience got into the swing of pantomime fever, singing along with the Robin Hood theme tune. And although the first few minutes looked set to promise a charming evening of disorganised chaos, the curtains soon pulled themselves together, the Merry Men hitched up their stockings and the actors got on with the show. 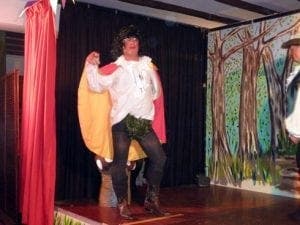 For me, pantomime newcomer Keith Fisher as Little John stole the show. His rendition of Dancing Queen was only enhanced by his bright red lipstick, cowboy boots, hilarious foliage cod piece and courageous support tights!

In true amateur traumatics style, the occasional prop mishap only added to the audience’s delight. I nearly fell off my chair when one cast member’s headset got caught up in another actor’s bright orange curly wig. The two had to stand rather close together while they gracefully untangled themselves!

The audience cheered and jeered, hissed and booed, chanted and sang along in all the right places and could only be described as raucous during the last night’s performance in particular. Perhaps helped along by the complimentary drink on entry and attentive service of the bar staff during the interval, I don’t think anyone could say that they didn’t enjoy the experience!