THEY might be lacking a striker, but a new restaurant in San Pedro could probably give Malaga FC a run for their money.

Despite not even opening yet, Rincon de la Sala already has a string of Premiership investors including David Bentley, Stephen Clemence, Paul Robinson, Alan Hutton, Stephen Carr and Michael Brown.

And to knock them into shape, Birmingham City boss Chris Hughton is also in the mix.

The restaurant is the latest venture for Ian Radford, who also owns La Sala restaurant and Buddha Beach in Puerto Banus.

The Marbella-based businessman, who has lived on the Costa del Sol since 1989, also hopes other stars will join the new venture.

These include Arsenal star Alex Oxlade Chamberlain, who he currently works with through football agency Impact, which is headed by top FIFA agent Rob Segal.

“Players are no longer looking at property to invest in, they are seeking out successful businesses,” Radford told the Olive Press.

“As La Sala has expanded and done well, players who invested from the start like David Bentley have continued to back us.”

The agent, whose wife is former Big Brother star Claire Strutton, continues: “In turn this has encouraged other players to come on board as well. 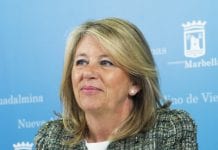