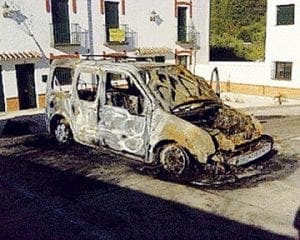 A BRITISH bar owner was horrified to wake up to find his car on fire in the sleepy mountain village of Jimera de Libar.

Paul Darwent, 55, who runs Bar Allioli, was woken at 3am, when he heard an explosion outside his house.

Darwent – who moved to Spain 12 years ago – said: “The fire brigade arrived quickly but it took a while to put out.”

He added: “There is practically nothing left of the car plus my cd’s, walking boots and other stuff.”

He has now reported the attack to police, who are investigating a number of neighbours. It is not known if it is linked to an ongoing feud with a rival kiosk owner.