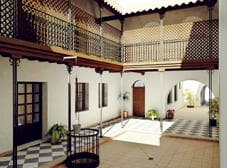 THE towns of the Campina are crammed full of architectural masterpieces.

And thankfully not any old builder is allowed to touch the huge catalogue of stunning palaces, churches and castles.

From the Torre de Santa Cruz and Convent of the Santisima Trinidad in Ecija to the old university and Monastery of the Encarnacion in Osuna, one builder has renovated the lot.

In total, Monolo Sanchez Ortiz, 58, has worked on over 60 key buildings around the area, including the historic walls of Sevilla and the landmark Puerta de Sevilla in Carmona.

His company Sanor is one of only 30 companies in Andalucia to hold what is known as ‘K7’ status, which allows him to pitch for the plum jobs of repairing the region’s patrimony.

Since the age of 18 he has had a close interest with historic buildings.

“I have a deep fascination with what makes old buildings tick,” he explains. “I love their ancient details and enjoy bringing out the best in them.”

This is completely clear when you see the impressive scale drawings that he makes in advance of each job undertaken.

Painstakingly drafted, he includes every last detail and insists that his team maintain every single part.

“It is often very hard work, takes considerably longer and costs more,” he explains. “But the end result ensures that it is definitely worth it.”

You can certainly see this love for detail at a couple of projects in his home town of Osuna.

The best of these is at the stunning hotel, Palacio Marquez de la Gomera, which his company now owns, being run by his brother Jesus.

This key 18th century palace is opulence in the extreme and it has been beautifully restored exentuating its marble patio and baroque staircases.

Full of wonderful details, it is one of the key reasons to visit the town.

Even more exciting – on an investment front, at least – has to be his latest project, which involves the renovation of another nearby palace.

The enormous project in Calle Carmen, which is over 2,500m in size, is nearing completion and will count on ten beautiful, state-of-the-art apartments, each with their own private garage.

With Sanor’s instinctive stamp for preserving its history, every detail has been conserved from ancient Roman pillars to the fascade and the old doorways, roofs and rejas.

“We have overhauled the doors, refitted the window bars and cleaned up an old religious fresco made from azulejos from Triana,” explains Monolo, whose three children and brother also work in the company.

Costing over four million euros, the development is meant to give a flavour of a convent.

“While the homeowners will be sharing the public spaces, each will have their own private outside spaces which are being carefully split up and divided with lattice woodwork,” explains Monolo, who has also boned up on the building’s history.

The spacious development itself dates back to 1750 and was once owned by a family from the Ruhr area in Germany.

It was built around the time that the town was centrally planned by Carlos III, the powerful, but austere monarch, famous for his simplistic and oversized palace at El Escorial, near Madrid.

Opposite a glorious church, it is just around the corner from the street, calle San Pedro, which is often credited to have the most ornamental buildings in Europe.

“This is an area rich in history and the development is right in the heart of the best part of town,” explains Monolo.