DESPITE the grainy appearance of the scanned document, there is no mistaking who it refers to.

In the space reserved for the name, a clerk has dutifully typed the words ‘ORWELL, George’, preceded by the author’s birth name Eric Blair.

Below it are listed other incidentals – date of birth, address and occupation – typical of any number of forms from the time.

But although the details themselves are mundane… the existence of the document has helped to shed new light on what was a period of major political upheaval in British and Spanish history.

For this file on one of the UK’s greatest writers is part of a recently released dossier comprising 200 pages of intelligence logged by the British Secret Service in the years following the Spanish Civil War.

Now, to mark the 75th anniversary of the start of the conflict – which came after a military revolt against the elected Republican government in July 1936 – the documents have finally been made available.

And what they show is nothing short of amazing, particularly for anyone with an interest in the Spanish Civil War.

For these files not only detail the movement of every Briton who joined the International Brigades, but they show, intriguingly, how there were many more principled British subjects prepared to die in the name of liberty and freedom than previously thought.

Indeed, it has emerged that almost double the number of British and Irish volunteers (around 4,000) actually travelled to Spain to fight the fascists under General Francisco Franco.

But, the dossier also shows a far darker side with it emerging that the British establishment spied on those that returned well into the 1950s believing that they might be communists.

Among the notes on Orwell, for example, we discover that he ‘took an interest in the activities of the French Communist Party during his time in Paris’.

The paranoia of the British government towards those who volunteered is perhaps unsurprising given that their recruitment fell to the Communist Party of Great Britain.

What’s more, it was well known that leading British communists held positions as officers and ‘political commissars’ with the British battalion in Spain.

Indeed, approximately 60 per cent of volunteers are believed to have already been communists before signing up, while a further 20 per cent are estimated to have become communists during their time in Spain.

The International Brigades included a large percentage of socialist, communist and anarchist volunteers from different countries who felt compelled to help defend the Second Spanish Republic.

Volunteers were sent by train or ship to Spain, where they were directed to the brigades headquarters at Albacete.

Men were divided up according to their experience and origin, and were then dispatched to units accordingly – with uniforms provided by the French Communist Party.

The act of placing men in battalions of similar nationality and language was seen as a necessity to simplify communication.

Foreign fighters who joined the conflict were under no contract, nor were they given a defined period of service.

This lack of strict guidelines and structure created a number of problems.

Those who wished to return home were not allowed to, while some complained that they had volunteered on the assumption that they could go home within three months.

Although this may have been true, the lack of documentation meant that they were unable to prove it.

The result was a volunteer army which was fighting for an ideal, but which lacked military discipline.

Those who were caught attempting to desert were confined to ‘re-education camps’ or in some cases received the death penalty.

However, the British Foreign Office managed to negotiate a settlement which exempted British volunteers from the death penalty for attempted desertion.

The number of volunteers who fought as part of the International Brigades has been estimated at between 32,000-35,000, although no more than 20,000 were in active service at any one time.

The number of British volunteers was previously thought to have been 2,500. However, the National Archive records – compiled by MI5 – have disproved this by including the names of more than 4,000 British and Irish people.

Some historians believe this figure should be treated with caution as the list comprises all those merely suspected of fighting in Spain and there is no evidence to suggest that they all made it over.

The list includes writer Valentine Ackland and journalist John Langdon-Davies, for example, neither of whom actually fought in Spain.

However, the Olive Press has discovered that there are also a number of Britons who went to fight, who do not actually appear in the National Archives.

Either way, the 500 Brits and Irish who are believed to have died in the conflict and the further 1,200 who were injured represents a heavy cost by any estimates.

While many of the more high-profile figures were Oxbridge types – the majority of volunteers were from working class backgrounds.

Hailing from the industrial heartlands of Britain, volunteers – including many jews – came from cities such as Manchester and Glasgow.

Among the volunteers were Jack Jones – who later became a prominent figure as the General Secretary of the Transport and General Workers’ Union.

“The awful realisation that black fascism was on the march right across Europe created a strong desire to act,” Jones said. “The march had started with Mussolini and had gained terrible momentum with Hitler and was being carried forward by Franco.

“For most young people there was a feeling of frustration, but some were determined to do anything that seemed possible, even if it meant death, to try to stop the spread of fascism.”

The decision taken by Britain and other western democracies to adopt a policy of ‘non-intervention’ also appears to have inspired many to take a stance.

“When England took the reins of ‘non-intervention’ I could hold back no longer,” said veteran Louis Hearst.

“I put everything else aside, and decided that I could not identify myself even passively with this political farce; I decided to go to Spain to defend democracy with deeds.”

He was no communist 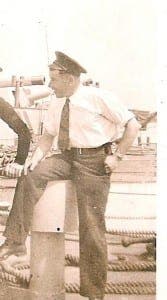 After his grandfather was turned away for being too old, his father – known as ‘Danny’ to his friends – set sail from Portsmouth.

“The International Brigades were always seen as communist,” McAngus, 63, told the Olive Press.

“But I don’t think my father was ever a communist, just left wing. In fact he later became a labour councillor in Scotland.

“I suppose like many he got involved in the name of fair play and went with his mates. He was young and had left wing leanings. Plus he was from Scotland which was very poor at the time.”

McAngus doesn’t appear on the MI5 watch list released by the National Archives, although his family are adamant he fought in Spain.

But while McAngus and his fellow Brits may have been made to feel part of a unified struggle as they joined forces with the Republicans against Franco’s rebels – the end of the conflict became a different story.

“At the end of it all the International Brigades were just left in the lurch, with no money and no way home,” McAngus explained.

“My father ended up in Bilbao on the northern coast, and him and his mate started running a bar to get the money to get back.

“When he finally made it home in 1939 he ended up going off to fight in the Second World War.”

He continued: “He talked very little about the Spanish Civil War, however my aunt Nan recalls how he returned to the UK loaded up with presents including lengths of silk, fringed shawls and lovely lacquered pencil cases.”

Orwell was shot in the neck and had to flee 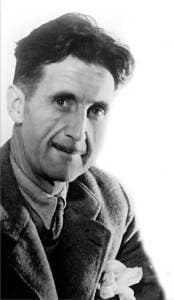 Soon after the outbreak of the Spanish Civil War, Orwell volunteered to fight for the Republican’s as part of the International Brigades.

As a sympathiser of the Independent Labour Party, he joined the militia of its sister party in Spain, the non-Stalinist far-left POUM (Workers’ Party of Marxist Unification), in which he fought as an infantryman. Orwell was shot in the neck near Huesca on May 20 1937.

He and his wife Eileen left Spain after narrowly missing being arrested as ‘Trotskyites’ when the communists moved to suppress the POUM in June 1937.