REMEMBER what I told you,” yelled my instructor Robin. “Let your arse slide, roll your shoulders and bend your knees, but above all just relax,” he grinned, before gunning the engine on the speed boat.

A second or so later I was being wrenched out of the water and onto my feet – which were strapped to what is known as a wakeboard.

It all seemed so simple and for a few triumphant seconds I rode literally on the crest of a wave, zipping along wondering what all the fuss was about.

This is easy I thought.

But suddenly my knees tensed and the board went from under me, bringing me to a violent stop – using my face as a brake.

“You certainly ate a lot of shit there mate,” exclaimed Robin, who is a current Irish champion.

And so ended my first run on what was to be a tiring, but extremely enjoyable introduction to the world of wakeboarding.

A creation similar to a snowboard, as far as the tuition goes you, quite simply, couldn’t have been in better hands.

Not only are the majority of instructors at Xtreme Gene current champions for their respective countries, but the little-known spot is one of Europe’s top destinations for watersports teams.

Nestled around the ‘secret’ Embalse de la Brena reservoir, near Almodovar del Rio, the camp of a dozen wooden cabins is a wonderful place for a weekend break.

Not just ideal for sports enthusiasts, it is a great place to bring the kids, who can learn how to ski, as well as canoe, fish and swim.

Tucked away at the end of an unassuming dirt track off the old Cordoba to Sevilla road, few places in Andalucia offer such stunning wilderness with spectacular soaring views across the Sierra Morena.

Set up as long ago as 2002, its owners Debbie and Matt Southom and former Spanish champion Andreas Alijo bring a wealth of different experiences to the table.

Like chalk and cheese, professional waterskier Matt has represented England, while Debbie spent years working in marketing for Ministry of Sound nightclub in London, and Bacardi.

“I used to organise loads of events around the world and, in particular, in Ibiza,” she explains. “I had big teams under me and so setting up a business like this came naturally to me.”

A fun-loving pair, they are now well integrated into the local community and are credited with bringing considerable benefits to the economy. 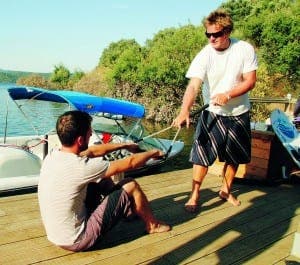 They certainly have a knack of getting the best teachers. Several of the instructors divide their time between teaching and competing at the key international championships.

All of which left me wondering how many other activities allow complete novices like myself such unprecedented access to athletes who truly are at the top of their sport.

Essentially it’s no different to rocking up to your local tennis club and having Rafael Nadal give you pointers on how to improve your backhand.

And, perhaps surprisingly, the teachers were remarkably patient as I floundered around in the brine, not knowing what had happened.

“We often get total beginners, as well as stag weekends, so they have to be patient,” explains Matt, who was once ranked at fourth in the world.

By the evening, I was ready for a quiet drink at the bar watching the fantastic sunset with an unobtrusive backdrop of ambient music, which gave the place a distinctly Ibizan vibe.

Although there is often a deep divide in ability on the water, the atmosphere on dry land was distinctly inclusive, with everyone made to feel like part of the family.

Meals are provided twice a week, although a lack of self-catering facilities leave guests with little choice but to venture into town on other nights.

That said, there are plenty of eating options in Almodovar, including the brilliant La Taberna, an atmospheric place with a great menu.

While the majority of visitors are true water babies looking to make the most of the excellent facilities, the area has plenty more to offer for those looking to keep their hair dry.

Built in AD 740, it dominates the landscape for miles around and boasts stunning views.

Its hilltop location and thick walls made it almost completely immune from attack – so much so that when King Fernando III conquered Cordoba in 1236 – the castle kept resisting for another three years before it finally surrendered.

It’s impossible not to be impressed by the sheer scale of the place and the work that has gone into restoring it to its former glory.

While it is slightly Disney-like inside, it was clearly seen as a good enough venue for films including hit Kingdom of Heaven, starring Orlando Bloom and Liam Neeson.

Only 15 minutes away you will also find the popular city of Cordoba, with its famous Mezquita, while nature lovers will enjoy a trip into the nearby Parque Natural Sierra de Hornachuelos.

As morning broke to the sound of my creaking limbs, it was time to try the more traditional aquatic activity of water skiing before heading for home.

This time I was given a demonstration of how it should be done by another of the UK’s top water skiers Jade Maryan, who effortlessly slalomed her way through a series of buoys on a mono-ski.

Thankfully, despite the pressure of being watched by both Jade and instructor Matt I somehow managed to maintain a degree of dignity.

Then it was away from waterworld, certain in the knowledge that this place will not remain a secret for much longer.