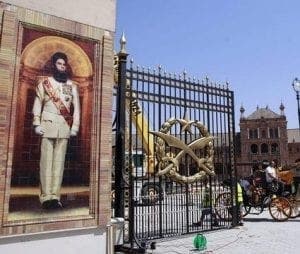 SEVILLA’S Plaza Espana has been overrun with bearded men in djellaba’s.

Under his latest guise as ‘The Dictator’, British funny-man Sasha Baron Cohen – the actor who brought us Borat, Bruno and Ali G – has descended on the city in a heavy beard and dark glasses to start shooting his new film.

The historic plaza – once the setting of George Lucas’ city of Theed in The Attack of the Clones and later the headquarters of Lawrence of Arabia – has now been transformed into his presidential palace.

It’s the first Cohen film to be financed by Hollywood, and reports indicate that the 39-year-old actor – who is starring alongside Megan Fox and Ben Kingsley – has been given ‘carte blanche’.

According to Paramount Pictures, his latest flick, also known as ‘Finchley Dreams’, will, ‘tell the heroic story of a dictator who risked his life to ensure that democracy would never come to the country he so lovingly oppressed.’

The comedian plays two roles in the film: the dictator, and the look-alike goat herder who secretly replaces him, forcing the real dictator to start a new life in New York.

It is estimated the filming in Sevilla, from August 30 to September 1, will bring in a million euros to the city in hotel room costs for the actors and crew alone.

And the total budget is estimated at 36 million euros.

The film is expected to premier in May next year.