This summer Andalucia got a new Pope.

Not from the Roman Catholic church mind, but from a somewhat surreptitious sect originating from an obscure village in a sleepy backwater of Sevilla province.

Little is known about this new pope – name Sergio Maria – but, as we shall find out, this is no surprise.

The Christian Palmarian Church of the Carmelites of the Holy Face – or more simply the Palmarian Church – sits inside its own compound near the village of Palmar de Troya, 15 kms south of Utrera.

In fact, its basilica – which looks like a cross between Rome and the film Lord of the Rings – completely dominates the semi-desert landscape around it.

But oddly, what stands out more is the fact that the 50 hectare compound is entirely ringed by a five-metre high Berlin-style wall. And with CCTV cameras dotted along it at regular intervals, it sends a clear ‘keep out’ message to anyone tempted to get too close.

The order – which has thousands of followers in Ireland, England and the US – has also deliberately broken any relationship with nearby Palmar de Troya which has a population of just 2,423.

Furthermore, devotees are cut off from society by strict rules that forbid communication with non-Palmarians, which, in part, explains how the cult has maintained such a low profile.

But, it is anything but small.

Indeed, the well established sect claims to have 60 bishops, 70 nuns and thousands of followers around the world.

It counts chapels as far and wide as the UK and New Zealand and controversially counts both the dictator General Francisco Franco and Christopher Columbus as saints.

There is incredibly limited information on the internet and, cryptically, nearly all of the references (and external links) from its Wikipedia entry have been recently removed. 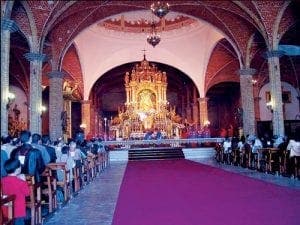 So why the big secret?

It was for this reason that last week, the Olive Press helped an Irish TV station pull together a documentary on the sect.

Spending a few days in the village of Palmar de Troya, we tried to get into the compound and speak to its disciples… but with remarkable difficulty.

When one Irish journalist – a woman – tried to enter the Basilica to take mass, she was turned away for ‘not having socks’.

She returned after putting socks on but they still refused to let her in and this time would not give her a reason.

What we did establish however, was that its doctrines appear to be based on revelations from the founder and first Pope, Clemente Dominguez y Gomez, an insurance broker from Sevilla, who reportedly had visions of Jesus on an almost daily basis.

It all started after four schoolgirls saw an apparition of the Virgin Mary above a tree on a finca called La Alcaparrosa near Palmar de Troya, in 1968.

The word soon spread and pilgrims started to make the journey from around Spain to see for themselves.

One of these was Dominguez, who in a scene reminiscent of the Life of Brian, claimed that the Virgin had given him strict instructions to rid the Church of heresy, progressivism and Communism and he had soon recruited a following.

The fact that he ‘staged ecstasies’ and supposedly received the stigmata helped his quest.

By 1975, he had formed a new religious order, claiming to be ‘faithful to the holy Pope Paul VI.’

A year later the elderly Vietnamese Archbishop Ngo Dinh Thuc, believing the apparitions were genuine, travelled to Spain and raised Dominguez – and a lawyer sidekick Manuel Alonso Corral – to the rank of bishop.

Despite Dominguez being blinded in a car accident in 1976 the pair went on to set up their own holy see, claiming that Dominguez had been mystically crowned pope by Jesus Christ in a vision.

Dominguez took the name Gregory XVII and appointed Corral, said to be the real brains behind the operation, his Secretary of State, Friar Isidore.

The pair travelled extensively in the earlier years spreading the word and courting new believers in a bid to secure donations.

Their trips proved lucrative with many people leaving the church vast sums of money in wills allowing the Palmarians to build their impressive basilica.

But Dominguez – a rather profligate Pope, who enjoyed wine, was fond of lavish robes, and came under criticism in the 1990s for ‘sexual immorality’ with several nuns – died in March 2005.

This proved a major turning point in the life of the church, when he was succeeded by his right-hand man, Corral.

Under the watchful eye of the new ‘Pope Peter II’ the Palmarians’ rules became stricter.

“It is not so much that the rules were changed but after the first Pope died they had to be followed to the letter,” explains local journalist Jose Manuel Brazo.

Among a litany of rules – which are said to number over 100 – women are not to be permitted to wear trousers, men are forbidden short sleeves and playing sport ‘in shorts’ is frowned upon.

In addition, listening to popular music is banned, as are TV programs that have actors outside the Palmarian dress code. So not much TV then. 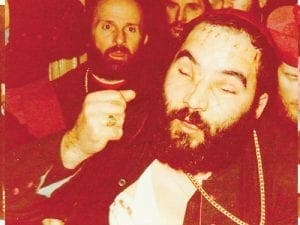 So strict are the rules, that one former member posted anonymously on a so-called ‘Palmar de Troya Support Group’: “Now I’m totally away from all things Palmarian, the feeling of freedom it brought was in equal measure to the feeling of loss at never being able to see my family again.”

It is of course this last point that has caused the most controversy.

Sinister tales are emerging from ex-members who maintain the ‘cult’ is tearing families’ apart, cutting devotees off from those who love them and even calling on them to die for the Church.

Another former member using the name ‘Amelia26’ recently posted on the site: “There have been no good memories of the faith, just bad.

“I come from a large family and none of them are Palmars except my father. He is very devout … and I doubt he will ever leave because he is brainwashed so badly.

“When all the rules became very strict, he stopped seeing my mother.

“I wish someone could just do something about the cult because it has caused so much pain and loneliness between families, none of us can take it anymore!”

In an ominous final par she added: “I don’t know how many crazy things they are going to come up with, for all I know they might make everyone kill themselves.”

Terrifyingly, this suggestion is not a million miles away from the rhetoric used in speeches given by Corral.

In a five page document called ‘Palmarian Holy Week 2005’ – Dominguez’s last official document before he died, written by Corral, the word ‘martyr’ or ‘martyrdom’ is mentioned 11 times in the first page alone.

Another frequent message reiterated many times is that ‘the non-Palmarian family you are linked to by blood is often the greatest enemy.’

But most ominously of all is the reference to warfare, when it was written: “The use of weapons in defence of God and his Church is a just War.”

Now, many fear that Sergio Maria, who became the third Pope, Gregory XVIII, after Peter II died on July 15 this year, will be even stricter and will take this militant vein further.

Little is known about Maria, except that he is one of the few Palmarians trusted to do business outside of the sect, for example dealing with the local bank.

“He is ex Spanish military and his papal seal shows the image of Christ in the Shroud of Turin,” explains journalist Brazo. “But not much else is known about him apart from that he has a fierce reputation.”

This is backed up by the opposition group ‘apostate activists’ who have posted numerous videos about the Church on YouTube.

“Sergio is a power hungry tyrant who is only too ready to take the reigns. More hard-line than Clemente ever was. This man will make the others look like children playing house,” insists one.

However, others more optimistic, believe that the arrival of Maria, although ominous, is actually the beginning of the end for this strange cult.

Unlike his two predecessors – who crucially were also the founding members – Maria has no claim to visions and is lacking the mystical character that enticed so many of the earlier believers.

Indeed, since 2005 there has been a gradual exodus of members and the money is apparently fast drying up say sources.

All that is left is the ostentatious basilica, referred to by Brazo as ‘the last stronghold of a crumbling sectarian congregation’ and a lot of secrecy.

REVIEW: We track down the true home of the Andalucian vernacular, where vegetables are the stars and your wallet...