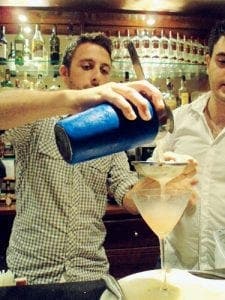 FIRST of all I want you to count to 14 in your head.

Then imagine having to produce a flawless Cuban Mojito in that time, to be scrutinised by a panel of world-renowned experts.

Simon Joseph doesn’t have to imagine it because he’s done it (in 13.5 seconds to be precise) and that’s why he’s a world champion ‘mixologist’.

The bartender and chef won the accolade in 2007 seeing off fierce competition to have his own creation, ‘Mr Old Ginger Flapjack’, selected as the winner of a competition to mark the 125th anniversary of whiskey company Jack Daniels.

Later this month, the talented Londoner will open the first Costa del Sol ‘bar school’ in a bid to pass on some of the skills he has acquired over the years.

“It feels like the right time to be setting it up, I get a lot of enquiries from bar owners wanting me to train their staff so I’m confident that the demand is there,” says Joseph, who owns Brubecks restaurant/bar between San Pedro and Estepona.

Luckily for me – and my colleague Wendy, who rumour has it, enjoys the occasional cocktail – Joseph is not expecting miracles as he patiently guides us through the various stages involved in making a Cosmopolitan.

To begin with we’re put to work filling the glass with ice and soda to chill it, before softening a lime by rolling it back and forth with the palm of my hand and cutting it into eight pieces.

Next, we’re told to ‘muddle’ the lime with a rolling pin, a process which uses the same technique as when using a mortar and pestle.

This forms the ‘base’ of the cocktail, the first stage in the process of ‘building’ the various layers of the drink, a phrase that Joseph returns to frequently.

The 27-year-old Londoner – whose family has a long history of bar ownership – was taught to mix drinks by his sister at the tender age of nine.

If you don’t understand food, you can’t be a great cocktail maker

But it is his background as a chef that he believes is the key to becoming a successful mixologist.

“If you don’t understand food, you can’t be a great cocktail maker,” the bartender explains.

“I had my first kitchen when I was 18 and I understand which flavours work well together and which ones don’t”.

This is supported by his insistence on constantly smelling the cocktail as it’s being made, in much the same way as a chef would taste his food. 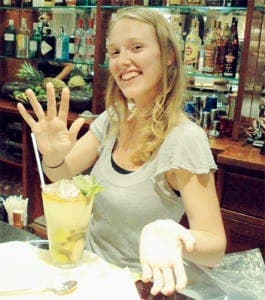 “I have three rules: firstly, keep the bar and yourself clean for obvious hygiene reasons, keep the customer informed and excited about the drink they’re about to experience, and keep your palate fresh. I only ever drink soda water and lime.”

Joseph – who is a brand ambassador for spirit manufacturer Martell – took over Brubeck’s in March along with his partner of three years, Lucy Tinker, 24, who he met while working in Gibraltar.

The pair compliment each other well, thanks to Joseph’s creative flare and Tinker’s business acumen, aquired from experience working in sales for companies including Virgin.

The next stage of the cocktail involves adding 50ml of vodka, counting to five while free-pouring orange liquor and adding cranberry juice ‘until it’s the same colour as the inside of your lip’.

Then comes the fun part, shaking.

The shaker is filled with ice, before the cocktail is then poured in.

The key to a good shaking technique I’m reliably informed, is to move your arm in such a way that the cocktail swishes round in a circular motion rather than just being bashed back and forth, in a bid to stop the cocktail from diluting too quickly.

The liquid is then double strained, helping to create the instantly recognisable cloudy pink colour of the famous Cosmopolitan.

All that remains is to flambe the cocktail using a lighter and orange zest, followed by the all important taste test.

While our first efforts are unlikely to win any awards, they gain Joseph’s approval and earn us some well deserved high-fives.

Brubeck’s serves a range of excellent food including a carvery on Tuesdays, Thursdays and Sundays. 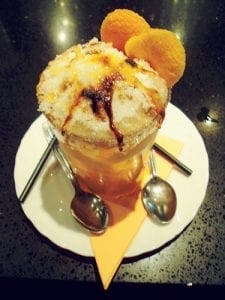