FANCY attending the final of Britain’s Got Talent in London or winning a romantic meal with Princess Diana’s former lover James Hewitt?

Well, make a bid on Talk Radio Europe’s annual telethon in aid of cancer charity Cudeca and you could be dining a deux with the dashing former cavalry officer or jetting off to the UK.

The Olive Press has teamed up with TRE as its exclusive newspaper partner for the event hosted by the Costa del Sol-based radio station on December 2. 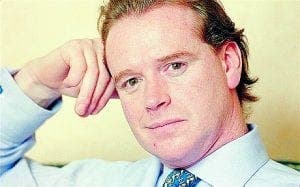 The annual bash, which last year raised over 26,000 euros for the cancer hospice in Benalmadena, is also offering tickets for the directors’ box at Manchester United and the X-Factor tour.

“And there will be a lot more big prizes on the day,” confirmed TRE CEO Steve Gilmour. “

“We’re offering things that are hard to get hold of and it will be a huge event. There are packages to events in the UK, including flights, hotels and meals.”

But he continued: “It’s not just about the big prizes though. As well as the celebrity dinners and five-star-hotel stays, there are also signed books and gift vouchers up for grabs.”

Punters can bid on the internet or via the phone and the highest bid wins the prize.

“We’re really happy to be supporting such an excellent cause,” explained Olive Press publisher Jon Clarke.

“In September our annual Expat 100 poll voted Cudeca founder Joan Hunt as one of the top five most important foreigners in Andalucia, in recognition of the positive impact she has made on patients’ lives over the last 20 years.”

Hunt said: “Being unwell in a foreign country where perhaps the patient doesn’t speak the native language can be hard, and it’s a great comfort to them to have us here to care for them.”

To take part, listeners should tune in between 10am and 7pm on December 2, and can also bid for prizes in advance at www.tretelethon.com from late November.