THERE are few places where you can genuinely say you have felt the force of the Romans.

But, as I dangled my legs into the sulphurous springs, known as La Hedionda, between Casares and Manilva I had a strange flashback to the days of Julius Caesar.

For here, in this sleepy, undeveloped valley is the still-standing Roman bathhouse, where it is said Caesar himself once bathed around 60 BC.

Having survived for over 2000 years, it is a privileged place to spend an hour and the perfect reminder of the rich heritage that has been left on the Andalucian coastline by a succession of marauding cultures.

Casares actually inherited its name from Julius Caesar, who is said to have ridden himself of a nasty skin complaint thanks to his visit to the Hedionda baths, which literally translate as ‘foul-smelling woman’.

But these days there is nothing foul about the classic ‘white town’, which was first shaped by the Romans and later the Moors, who inhabited the region for over 700 years.

Perched on a rocky outcrop and pouring down two sides of a ridge, this most spectacular of Spanish towns looks impressive from every side.

A photographer’s dream, few towns can compare in terms of subject matter.

Backed by the soaring peaks of the Sierra Crestellina, and views towards the Med and Africa, Casares is also blessed with fabulous walks and wildlife, including a colony of vultures and other rare birds, including eagles.

An enterprising company has recently produced an excellent map of the nearby walks, one of which ascends straight out of the village on a steep path into the verdent hills. 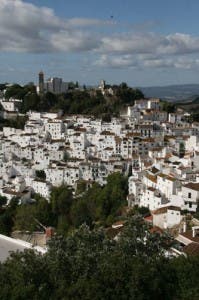 Up here the views stretch all the way to Gibraltar and Africa and you will find yourself completely on your own. Well apart from the odd sheep or goat.

In fact, the town is fast becoming known for its excellent goats cheese and yoghurts. Award-winning Quesos Crestellina produces a fantastic range of organic cheeses from its herd of 400 goats that spend the day up on the peaks.

A family-run affair which dates back over a century, owners Ana and Juan run a tight ship aided by their son Juan, who does all the marketing.

“We sell the cheese all over Spain and yoghurts to the local school, as well as the five star Finca Cortesin hotel,” explains Ana, whose shop also stocks some of the region’s best quality local produce.

Head up into the village for a general wander, in particular admiring the labyrinthine Arabic quarter, with its narrow streets and low rise houses. The most impressive part is the Alcazar (or fortress) at the top of the town, first built by the Romans and later strengthened by the Moors.

From here you have spectacular views and an attractive 16th century church that has been recently renovated.

On your way down take a look out for the street Calle Carrera, where one of Andalucia’s heroes Blas Infante was born. Infante, who was shot during the Civil War, was the man who planned, forged and declared Andalucian independence (in nearby Ronda, for history buffs), before being killed at the age of 41.

Nearby Manilva also has its fair share of history. This is clear from the huge expanse of ruins – much of them Roman – that lie, largely ignored, next to the fortress at Manilva port, known as Duquesa.

It is an interesting area, including a bath house, villas and a necropolis, most of which was discovered in the late 1980s, and which one hopes will be properly excavated in the near future.

The fort itself is well worth a poke around. Built in the 1760s to protect the town against continual incursions by pirates, it is incredibly solid and earnt its builder Francisco Paulino a title and the honour of commanding a cavalry company.

It is here where the town hall of Manilva has its archaeological team, which has recently been busy investigating an exciting Roman discovery in the town.

The substantial remains of a kiln dating back to 2AD are in a good condition and were found alongside a series of fragments of pottery.

It is thought the unique design may be the only existing example in Spain and could serve as further evidence of the town’s key role in exporting ‘garum’, one of the most popular products during Roman times.

Then known as Saltum, Manilva became famous for the delicacy, a pungent paste made from fish guts.

Exported to the Eternal City of Rome via boat, it needed to be stored in well-made pots, called amphoras. And it now seems likely that the recently discovered kiln may be where these were made on an almost industrial scale. 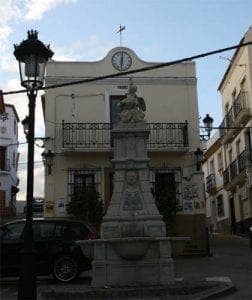 While the centre of Manilva is not of great interest, one of the things you cannot fail to miss is the large amount of vineyards clinging to the steep slopes that drop away from the town.

Mostly Moscatel, the vines are largely for growing grapes for raisins, although in recent years there has been an attempt to return to winemaking, with some astonishingly good dessert wine.

“We have seen a lot more people interested in buying the sweet wines over the last few years,” explains local shopkeeper Maria Esteban, who sells the wine, plus a lot more local produce from her unmissable shop Frutas Pascal y Hijos on a bend on the way into town.

As well as nuts and pulses, there is a huge range of almost tropical fruits such as avocadoes and cherimoyas, which come from the Andes and grow well here in the protected coastal valleys that are fed by the rich sulphorous waters.

You will find this and many other products available at the regular Sunday rastro, which – whether rain or shine – brings out the best vegetable sellers around.

Few of the farmers use or have a need to employ chemicals and depending on the season they often build their makeshift stalls from the stream-side cañas.

Expect to find excellent local honey, cheese and home-baked bread, as well as herbs and spices.

Among the cheaper ‘boot sale’ wares, you will often find a gem, an unrecognized treasure among the household chuck-outs.

Also around the area you will expect to find other excellent artisan products, in particular at Sebastian Fisher’s workshop in Casares and also at the well-established and popular La Tienda on the road down to the coast.

Here, you will find some excellent porcelain and pots, alongside clothes and jewellery.