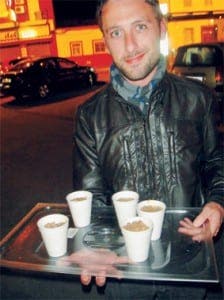 HAVING to find a suitable gift for a distant relative or practising the art of diplomacy with an awkward in-law can make the festive period seem a testing time.

But for one element of society, spending Christmas Day with boring uncles and squabbling siblings is an experience from which they are far removed.

For an estimated 40,000 homeless people living in Spain, Christmas is just another day when the key concern is where the next meal will come from.

Many – an estimated 6,190, according to a recent survey – are sleeping rough on the streets and vulnerable to the elements, and even physical attacks.

The issue of homelessness understandably raises its head at Christmas, the season being so bound to family.

Unemployment and family breakdown, which can lead to drug, alcohol and mental health problems, are seen as the two main factors in becoming homeless in Spain.

That said, according to Spain’s National Institute for Statistics (2005) a third of homeless people are teetotal and have never taken illegal drugs.

On top of this, over half are actively seeking employment and 13 per cent have higher education qualifications.

Significantly, less than a fifth rely on state handouts, meaning that many are dependent entirely on the work of charitable organisations.

One of Spain’s main organisations supporting them is Caritas, part of the Catholic church, which provides food and other provisions to homeless people across the country.

Locally, in La Linea – which has around 25-30 homeless people – Caritas has joined forces with enterprising British expat Mary Finlay, whose team go out every night of the week.

Her desire to help those less fortunate than her was stirred after reading an article on the subject and she pursuaded her daughter and son to join her helping out.

“It was a cold and horrible night and something just struck a chord with me – I decided I wanted to do something to help,” said the San Roque-based 59-year-old, who has now been providing hot meals for the past year.

The Olive Press joined Mary – who works in nearby San Roque hotel – and Caritas volunteers on their nightly rounds around La Linea in search of some of the individuals behind the statistics.

9pm
Packed into a tiny office at a Caritas-run half-way house tucked away among the town’s labyrinth of nondescript side streets, the group of six volunteers say a prayer before loading provisions into two cars and heading to a patch of grass in front of the town’s old hospital building. A group of six homeless people greet us and chat amicably as we dish up a steaming cup of lentil soup along with a plate of roast chicken and potatoes provided by Mary. Caritas hand out goods including fruit, bottled water and a pastry.

9.30pm
Antonio, an elderly Spaniard who spent 30 years working as a bootblack in the town, is in his usual spot. Perched on an improvised seat of old cushions piled up against a shopping trolley and covered with a sheet of cardboard, he is in the midst of an indecipherable rant. A kind-hearted, articulate and popular man in his younger years, Antonio now suffers from mental problems and has been reduced to sleeping in a warehouse.

10pm
As we pull up alongside a row of abandoned cars confiscated by the police, something stirs inside one of them. A door opens to reveal the haggard face of a frail lady called Mercedes – a heroine addict who insists she is now clean – although the group aren’t convinced. She tells us that the local police have been checking on her every hour for the past few nights after she told them she was beginning to feel desperate. “She’s 52 but the heroine has made her look about 102,” one of the volunteers, Mark El-Zein, tells me after we leave. “She comes from a very good family but she just didn’t know what to do with all the money and ended up spending it on drugs.”

11pm
After visiting a number of other regular sites without finding anyone, we come across Jose Carlos, an amiable Portuguese man who greets everyone enthusiastically in a park near the Gibraltar border. Of all the homeless people we have encountered, Jose looks by far the healthiest, due to a surprisingly religious gym regime. He usually gets his meals from a day centre run by the Junta, but the centre is currently closed due to a strike meaning the meal provided by Mary and the team is the only food he has eaten all day.

11.30pm
Sat on a bench in the brightly-lit town centre, an Irish woman wearing heavy mascara looks distant as the volunteers chat to her. Suffering from mental problems, she was disowned by the family of her Spanish husband following his untimely death. Mary tells me there are suggestions that the family may have even taken advantage of her fragile mental health to fraudulently claim her benefits, forcing her onto the streets.

Midnight
We drive through La Linea’s most deprived area, Junquillo, with its rundown social housing and numerous gypsy families. There can be few places along the Costa del Sol that emphasise just how exposed and vulnerable the homeless people living here are. As Mary explains: “You would not even want to walk here in the day.”

12.30am
Our final stop is a shipping container tucked away in the corner of a dimly lit skatepark, overlooking Gibraltar’s shiny new terminal building. The fact that I subconsciously begin to think of the container as a relatively safe and desirable spot to spend the night brings into sharp focus the daily reality for La Linea’s homeless population.

1am
Tucked up in the warmth and security of a comfortable bed, in a well lit room with a lock on the door, it’s difficult not to feel a slight sense of unease. Many, if not all of the people I had met during the course of the evening had experienced that same sense of security at some stage during their life. But as Mary had earlier explained: “It’s frightening to think that it could happen to anyone. All it takes is one life-changing event like a divorce and you can find yourself on a very slippery slope.” She continues: “It is just wonderful to know you are having a positive impact on their lives. When you realise how kind, educated and engaging many of these people are it gives you a lift that’s difficult to explain.”

KINGS OF HASHISH: Trial begins for Castaña clan, alleged to have made €30 million from drug trafficking in southern tip of Spain