AN expat businessman is beginning the fourth week of a hunger strike at Malaga airport.

Iranian-born Mer Parsi, 48, has lost 10 kilos since he began his protest over an issue with the Spanish Foreign Ministry.

He says he lost his business, his home and his personal savings and was left with nothing.

Since January 2, San Pedro-based Parsi has been living on just three dates a day.

Parsi says he and his Spanish wife had set up a business with the ministry’s approval in 2008 to sell 80 homes to a group of Iranian buyers.

He insists the ministry backtracked on the deal and left him financially ruined.

“They promised they were going to help,” Parsi told the Olive Press, sitting near his makeshift bed on the airport’s main concourse.

“I got a verbal contract and a letter saying they would support us.”

But when the enterprising Parsi tried to seal the deal at the Spanish Embassy in Iran’s capital Tehran – having spent 600,000 euros and two months securing 80 clients – he was refused entry.

“We were in front of the embassy door,” he said. “Everything was legal and ready to go. But the guard didn’t let me or my clients in.

“I wanted to die. Everybody looked at me as if I was a crook.” 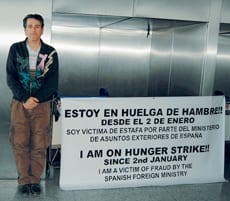 Parsi has since made numerous calls to the Foreign Ministry demanding answers.

A spokesman at the ministry told the Olive Press that Parsi is turning an administrative problem into a political issue. “He says the Ministry lied to him. He was told he should go to court, but instead he started to strike.

“Perhaps he did not get the support he deserved.”

Parsi insisted he had been to court and was turned down.

“This is my last resort,” he added.