IT’S good news for Malaga and Motril… and even better for Ronda.

The PP government has derailed plans to bring the so-called Mediterranean Corridor inland through the Serrania de Ronda… and decided it should run along the coast.

PP leader Mariano Rajoy has announced that the  rail route should go from Algeciras to Almeria, via Malaga.

The new proposal – which will cost 11.7 billion euros – is now being taken to the EU for its final approval.

Once completed, the new corridor will allow passengers to travel from Algeciras to Barcelona along the coast.

The route between Malaga and Estepona alone is expected to generate 100 million passengers a year.

Deemed a priority, the new route goes against the previous government’s plans, announced in December, for the rail link to go inland in Almeria, taking in Granada, Antequera and Ronda.

The routing through numerous green areas around Ronda and the Guadiaro Valley caused uproar for its environmental impact.

“If true, this is fantastic news for the Ronda area,” said businessman Nick Smallwood, who has a home alongside the Ronda route.

According to Ana Pastor, the new Minister for Development who unveiled the plans, construction will take place between 2014 and 2030.

Joan Amoros, General Secretary of Ferrmed, which is promoting the construction, said he was ‘greatly satisfied’ with the decision to come down the coast.

He said it recognised the coastline and, in particular, Malaga and the Costa del Sol as an ‘important hub’.

While expensive the corridor is still projected to have a connection from Malaga port to a future logistics area, known as a ‘dry port’ near Antequera.

Andalucia PP boss Javier Arenas, who is standing in next month’s regional elections, insisted the project was ‘very important for the future, for innovation and the creation of employment’. 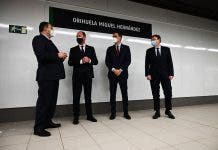