MEN with tears in their eyes is not an image I associate with the macho act of carrying something really heavy.

But that is what greeted me when I was invited to take pictures of the team – or brotherhood – who were about to carry the effigies of Jesus and Mary around the streets of Ronda.

In stark contrast to the excitable buzz of the waiting crowds outside, inside it was a sombre and intimate moment that clearly meant a lot to those taking part.

Small groups of men clad head to toe in white and clutching rosary beads patted one aother on the back while others stood alone offering a quiet prayer to the Virgin.

This touching display of emotion made me realise that I had completely underestimated the motivation of those involved.

In my ignorance, I had assumed it was based on the desire of a team of 20-something lads to show they were ‘real men’ by taking part in the six-hour endurance test.

But it quickly became apparent that they were motivated instead by a deep sense of duty that had influenced them for most of their lives.

“It’s a tradition for my family as we’re all members of the church,” Granada-based student Jose Ruiz, from Ronda, told me as we waited for the procession to start.

“I grew up watching the parades and have always liked the imagery.

“When you see and feel something special like that, it makes you want to be a part of it.”

The poignant atmosphere came to an abrupt end when the group leader barked the order for the carriers to get in position.

Those taking the first shift began to scramble under the effigies, into a dark and cramped space reminiscent of the conditions one might associate with slave ships.

Once under the turquoise veil that hangs down to the floor, the 30-odd carriers are left in total darkness, unable to stand fully upright and just inches apart from those around them.

It is certainly not a job for the claustrophobic.

The striking appearance of the effigy above them is typical of the iconography that drips from every orifice in Catholic churches.

The image of the Virgin Mary with her ornate crown, surrounded by dozens of candles and white flowers, is beauty to behold.

As we finally emerged into the streets for Palm Sunday – the first parade of the Semana Santa season – the effigies were greeted by a loud round of applause from the waiting crowd, and away we went.

It was nothing short of a miracle, for most of the day had been dominated by speculation about whether the procession would actually be able to take place at all.

Yet again, Easter in Spain, has been plagued with bad weather warnings and the clouds had been gathering all weekend.

The carriers had busied themselves with final preparations, regularly casting their eyes skyward at the ominous rain clouds lingering overhead.

A minister took to the pulpit to give updates on the weather. An eclectic mix including men wearing cushioned neck supports and children in pointed black hats, were hanging off his every word.

Twice the start time was put back, pushing everyone into yet another frustrating cycle of sending text messages and smoking cigarettes.

I milled around with the group of carriers as they cracked jokes in an effort to break the palpable tension that filled the air, with many of them admitting to feeling un poco nervioso.

Earlier I had watched as they helped each other fit the tight, restricting back supports and neck protection that are crucial to be able to safely carry such a heavy object.

There had been a sense of purpose as they did so – something which had been lost in the delay that followed.

It soon returned the second the minister announced the procession was finally given the all clear to begin.

She claimed the good news had come from the Met office, but given the surroundings and the occasion, it was tempting to believe it was down to divine intervention. 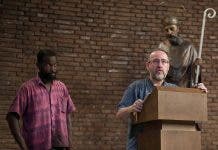 With atheism on the rise in Spain, Maya Eashwaran checks out why the masses are deserting the church 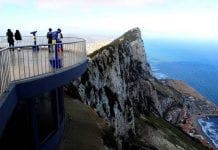