A SENSATIONAL new film is planned about the dramatic kidnap of a five-year-old expat on the Costa del Sol 25 years ago.

The movie – with could star British actor Vinnie Jones – tells the story of the incredible rescue of Melodie Nakachian, who was snatched at gunpoint on her way to school.

Written by expat Paul Grimshaw – who is about to shoot another gangster flick Shill, also starring Jones – it will recall the kidnap, which became international news in 1987.

It happened as terrified Melodie was dragged at gunpoint from her car on her way to Aloha College, in Marbella.

An agonising three days later, Melodie’s father – rich Lebanese businessman Raymond Nakachian – received a call from one of the kidnappers.

The distressed father was told that if he wanted to see his daughter alive, he would have to cough up 1.5 million pesetas in cash (the equivalent of nine million euros today).

Nakachian, constantly pursued by the police and media, negotiated with the French and Spanish kidnappers to bring the ransom sum down, pleading for proof his daughter was alive.

The kidnappers responded with photos of the tot clutching the day’s newspaper, and chillingly, locks of her dark hair and voice recordings. 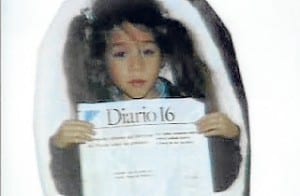 After setting a date for the handover one of the kidnappers made an unthinkably stupid mistake while out jogging on the beach.

Clumsily, he dropped his wallet which was later picked up by a passer-by and handed to police.

Inside were details including the girl’s name, a draft of the ransom note and – crucially – details of where she was being held.

Finally, 12 days after she was abducted, a dawn raid involving 100 police rescued Melodie from the kidnapper’s hideout in nearby San Roque.

The story is being developed by scriptwriter Grimshaw, 45, from Cheshire.

Now based in Calahonda, he is working closely with the family, who still live on the Costa del Sol, in Benahavis.

“I’ve been in a lot of discussions with them and have met Melodie,” he said. “It will make a great film and Vinnie’s manager says he is very interested.

“The energy behind Shill has given us a platform to develop the idea of bringing the story of Melodie back to life,” he added.