EXCLUSIVE By Wendy Williams and Jon Clarke in Cabopino

A BRITISH woman is convinced she saw missing Madeleine McCann with a German or Dutch couple just days after she was snatched.

Mother-of-two Karen Sisson, 49, was so convinced she had seen the three-year-old on a Spanish campsite that she contacted police in three different countries to investigate.

According to Sisson, the mysterious girl did not speak and seemed ‘out of it and extremely removed from her family.’

She added that she looked confused and didn’t seem to socialise properly with the couple.

But despite filing a report with both British and Spanish police at the time, giving descriptions and a car numberplate, Sisson, who lives in Gibraltar, is certain the sighting was never investigated.

Intriguingly The Olive Press has now managed to locate details of a German family – under the name ‘Karsten Meyer’ – who did indeed check into the Cabopino campsite, near Fuengirola, three days after Maddie disappeared.

An easy drive from where Maddie went missing in Praia de Luz, in neighbouring Portugal, it would certainly have been a good place to lie low for a week, with few tourists at that time of year.

Even more intriguingly, records from the campsite show that the couple actually paid a supplement on arrival on May 6 for an ‘extra child’ having originally booked themselves in as one family.

They had a blue Mercedes Vita van and were towing a caravan.

A numberplate recorded by the campsite, which began ‘BE’ with five letters has not been used in Germany since 1974, although the first Vita van’s were only manufactured in 1996.

While photographic records of the car they were driving have now been deleted, a receptionist agreed the entire booking seemed ‘a little odd’.

“I don’t know why they wouldn’t have booked everyone in together in the first place,” said an employee, who was working at the campsite at the time.

“But this is the first we have heard about any possible Maddie sighting here and police have certainly never been in touch.”

It is this discrepancy that has so irritated Sisson, who this week once again contacted UK police investigating the case.

“There was something strange about it all,” explained the Durham-born artist, who explained that the couple were of slim build and looked to be in their late thirties.

“It was like the girl was alienated and completely different to her family. It really was most peculiar,” said Sisson.

“She was sat on her own, not playing but just standing swaying as if in a dream. She looked really out of it.”

She continued: “It was also strange that they also had two toddlers, with curly blond hair, eerily like Sean and Amelie.

“And there were children’s toys, a bike and rollerblades around the caravan for a girl her age, so I had the impression maybe they had lost a girl and seen Maddie and wanted to replace her,” she added.

“I deliberately went to look at the girl again the next day and she was wearing the same clothes as the day before even though it was 27 degrees heat.

“A mother would know that this was a strange thing as children of that age go through so many clothes and love to strip off in the heat.

“I have a little girl myself who is just a year older than Maddie; it makes me think about it even more.”

She continued: “At one point the girl started to move towards the pool to play with other children and the lady came and got her and lead her back by the hand.

“She obviously did not want her playing with the other kids.” 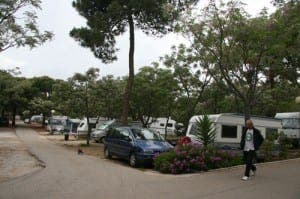 Sisson had been on holiday with her husband Richard, a buyer for an electrical business in Gibraltar, when she first set eyes on the girl.

So convinced was she that it could be Maddie she actually made a two hour round trip a week later to check the family out again.

“I literally could not sleep, it haunted me and I decided to drive back to have a second look,” she said.

“It definitely looked like her, and again I contacted Crimestoppers and even my local Gibraltarian police, but nothing seems to have been done.”

The campsite confirmed that a Karsten Mayer had stayed there from May 6 to May 18, 2007.

As well as confirming the car number plate and a date of birth from 1970, they were also able to furnish a passport or ID number.

The Olive Press is now trying to track down the couple and the information has been passed on to police and the family.

A spokesman for the McCann’s said: “This lady has done exactly the right thing in reporting what she saw to police.”

The information has been passed on to Scotland Yard’s Operation Grange, now probing the crime.

The new sighting comes just days after a woman claimed she saw Maddie McCann on a beach near Nerja.

Rose Johnson, 70, told The Olive Press, that she saw the girl two summers ago with a family very different to her.

Hers is not the first sighting in the Nerja area, and just two weeks ago Portuguese police contacted their Spanish counterparts to investigate some leads in the area.

“The whole incident was just so haunting it really stuck in my mind,” concluded Sisson.

“It would have been so easy for them to get to the campsite from Portugal. I am sure they could go under the radar.

“She could easily be on the Costa del Sol and they didn’t look like your average holidaymakers, but much more like expats who might be moving around.

“People have asked me why didn’t I just get hold of her, but you just don’t feel like you can.

“You also don’t like the idea of being caught taking photos.

“You want the police to do their job and not you having to do it for them.

“I really think she’s still out there, and I hope they take these new leads seriously and not just put them in a pile.”