IT’S 3pm and my well-groomed body is strapped inside a clapped-out work van.

It’s 34ºC outside, and perspiration is seeping from every pore.

I look up and see my reflection in the Ray-Bans of a stocky, unkempt Spaniard, who is terrifying me with his god-awful driving.

Jagged tools are everywhere including what appears to be a blood-stained spanner resting against my freshly-polished brogues.

What’s happening? Oh, that’s right; I was late for an interview and decided to hitchhike!

In accepting a lift from a stranger, I’ve done what less than one per cent of Brits dare.

But why? In a word FEAR! Movies like The Vanishing, Breakdown and Wolf Creek don’t exactly promote ‘free-wheeling’, and who could forget Rutger Hauer’s steel-eyed maniac in The Hitcher?

In reality, roadside-killings are rare, but horrific when they do occur.

For example, take ‘The Alcasser Girls’ case in 1992 where three travelling teens were raped, tortured and murdered, in Valencia’s outback.

Still, despite the risks, people tend to do desperate things in dire situations.

In my case, I was en route to a teaching interview at a high-achieving school in the middle-of-nowhere.

As there was no direct train-stop, I exited at a remote, rural station.

Usually, I’m a methodical planner but on this occasion a quick glance at the ‘map’ turned my legs to jelly.

How could I have entered the wilderness with instructions like ‘walk diagonally across the woods?’ Even Bear Grylls would be up sh*t creek.

Then I saw the van thundering through a sandstorm and assumed it was a mirage.

The sun had been boiling my brain for an hour and I was just about to put my tie around my head Rambo-style!

It’s fair to say, I was close to cracking.

Perhaps it was this temporary insanity that caused me to flag down the vehicle and accept the lift offered.

Talk was minimal during the ride with plenty of awkward silences.

After seeing pueblos replace pine-forests, my heart sank as we zipped past a sign for the school.

In the movies, this is the part where someone says: ‘Hey, you missed the turn’, only to be gagged by a chloroform hankie!

In an effort to keep calm I recalled some reassuring facts; like how the majority of murderers are known to their victims and how cows kill more people annually than escaped lunatics (so screw you, veggies!)

A sharp turn rocked me sideways and we swapped open roads for dusty, dirt-tracks.

As we passed by dilapidated farmhouses and bone-dry allotments, a posh private school seemed an eternity away.

Slyly, I rubbed a few shirt fibres on my seatbelt – like they do on CSI – and planned my ‘exit strategy’.

However, before I could reach for my Lynx Java I spotted a couple of respectable-looking white-washed villas.

In a matter of seconds we’d gone from Deliverance to Dynasty!

As I opened the door sunlight rushed in and revealed the ‘blood-spattered’ tool to be nothing more sinister than a touch of rust. Now I felt like the spanner!

Sitting in reception, I imagined Mario’s family hearing about some suited, sweat-soaked Rambo-impersonator stranded in the Spanish bush.

Heck, his wife probably thought he was mad for picking me up!

With my faith in humanity restored, I breezed through the interview and landed the job.

And to think, if it hadn’t been for Super Mario, the phantom van man, I’d still be in those woods!

As a tribute, a poster of Jack Kerouac’s On the Road will be going up in my new classroom.

Obviously, I won’t be encouraging students to ditch their Metro cards or loiter round lonely truck-stops.

What I will tell them however is not to be too afraid of the big, bad world.

Yes, evil exists, but most ‘moral panics’ in society (i.e. ‘stranger-danger’) are exaggerated to scare people into buying newspapers.

And if they don’t believe me I can share this Good Samaritan tale.

Thought of the fortnight

LAST week, Carlos ‘The Bugman’ told me that cockroaches leave behind a chemical trail telling others the best places to go, y’know, for food, warmth, shelter, etc.

That’s like a 300-million-year old Trip Advisor solely for the insect world.

“Erm, yeah. We’re going behind the bidet. Ken and Aileen went last week – and loved every second of it” :) 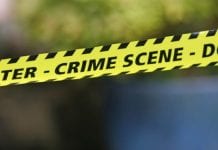