HE had been heading home from work at 6.15 on August 30 when he spotted a huge plume of smoke high in the hills above his municipality.

Just ten minutes later the mayor of Mijas Angel Nozal (below) was up in the hills overlooking the largest blaze the Costa del Sol had ever seen and plotting how best to save his town from disaster.

“It was really just a coincidence, but I immediately knew we were going to be in trouble,” he tells the Olive Press at his office at Mijas town hall. “The blaze was well established within a quarter of an hour so we had to move fast.”

So began the longest, most scary 36 hours of the mayor’s life, as he worked with the emergency services and fellow mayors to fight the horror fire that killed one and destroyed over 200 houses.

Initially meeting up with the mayor of Alhaurin el Grande at 6.30pm, at Puerto de los Pescadores, near where the fire began, he was soon placing his men strategically along well established  emergency lines. 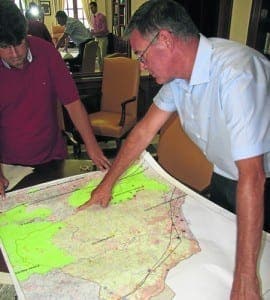 “I said to three of my fire crews to stay put at Puerto de los Pescadores… I told them the fire must not pass them, as if it got to the Valtocado area it could burn all of Mijas,” he continues. “I then got in contact with my friends at Fuengirola, Torremolinos and Rincon town halls to send as much help as possible.”

While coming under the overall command of national firefighting force Infoca, each town hall along the coast has its own well-planned and rehearsed fire drills.

In total, Mijas had 45 firefighters, 100 local police and 80 civil protection officers at its disposal.

Using 20 different fire vehicles they were immediately sent to strategic points around the hills to fight the blaze.

On cue, the mayor rolls out half a dozen colourful charts showing me the areas at highest risk of fire, where terrain is impossible to reach and where residents could be in danger.

But, the emergency services already knew that day was very high risk.

“It was the perfect conditions for a huge blaze,” continues Angel, who previously worked in insurance before being elected as the town’s PP mayor last year.

“There was a very deep high pressure with long isobars creating strong winds and a lot of turbulence.”

In perfect English, he explains how local fire crews call it ‘30/30/30’, when the temperature is over 30 degrees, the wind speed was over 30 knots and the humidity was below 30.

“It was one of those days when you needed to pray and hope for the best.

“But sadly, common sense is lacking and people need to learn that you can’t have fires in the summer and particularly a bbq, as just one spark can cause a fire like that.”

As for the cause of the blaze, as other Olive Press sources have confirmed, the fire seems to have begun on the estate of a German expatriate near Barranco Blanco in Coin.

“It seems apparent that the fire was started by someone burning garden waste, which is amazing.

“But within minutes there was this huge fungus cloud like Hiroshima above the hills.

“It was very scary and flames were shooting high into the sky with ash raining down as far as Estepona.”

He continues: “Fighting it was very hairy, but everyone fought valiently and we had to escape like rats at certain points to avoid getting burnt.”

He is also highly suspicious that a second front that formed to the north of Calahonda on the Friday was ‘probably’ started deliberately.

“Well, put it this way, we thought we had the blaze completely under control in Mijas by 3am on Friday morning, so it is very suspicious that by 9.30am a new fire broke out in Calahonda. It nearly burnt whole urbanisations and I think somebody started another fire deliberately. You can really understand this if you go up to the church at the top of the hill there and look around. The two fires don’t seem to be at all connected.

“I hope the police get to the bottom of it.”

Ultimately, while sad about the huge damage to the environment and homes in areas like Entrerrios, he is grateful that the whole of Mijas wasn’t much more badly destroyed.

“It was really touch and go and could have been much worse.”

He continues: “I didn’t get to sleep until around midnight on Friday, some 36 hours later. I was living on adrenaline. I hope to never have to do it again.”