WITH films about the Camino de Santiago emerging all over the world, it is more popular than ever. Here are some highlights from my personal camino.

My legs already had a gentle ache when I walked down the train station in Pamplona. Of course, I got lost but was left heart-warmed by a lovely old man who led me in the right direction and wished me my first buen camino. It had begun.

I started to worry about my lack of navigation equipment when looking for the albergue in Ponferrada. Locals told me “todo recto” (straight on) when bridges, rivers and curved tracks were all that appeared and “es el techo negro, lo ves?!” (it’s the black roof, can you see it?!) in a place where every building has a roof as black as soot. My worries about not having a map were soon replaced by the fact there were no beds left in the albergue.

Albergues were havens of rest and great social occasions. The hosts gave you a warm open welcome, even in the most commercial of places, and familiar faces were everywhere.

Here are some strange observations. Sometimes, staff only spoke very basic Spanish. I translated for people (this became something of a theme). In one albergue, the showers were part of the chapel. In another place, the gentle itch of bed bugs haunted me for days afterwards. In the albergue in La Faba, run by kind, peaceful Germans, I resorted to sleeping with my fingers scrunched deep into my ears because the snoring was so monumentally loud.

The hardest moment in the most wonderful place

The ascent to La Faba wasn’t enjoyed, the view not even considered, as one foot was put in front of the other. It was the hardest moment but now all I really remember was being able to finally appreciate how the vineyards had turned into chestnut trees and pines, and their scent was floating across the valley whilst I put pen to paper that evening.

‘In an albergue in Leon,’ the Basque chef recounted, ‘there was a very famous photo in a large thick frame. It had pride of place in the entrance hall, there for everyone to marvel at. It was a photo of the only man to have walked the camino without getting a single blister. People ran, or hobbled, towards it. One of the camino’s miracles, a true hero. On approaching, you stare at his perfect toes, displaying a gentle peachy blush. On further inspection they even seem to be glowing because they’re so blister free. Closer still and ready to put a hand to those miracle feet and it hits you. They’re not very hairy. They don’t have very obvious creases or muscles. In the darkest of dark humour, you realise that they’re prosthetic limbs.’

Love affair with the rucksack

A strange phenomenon occurred. I couldn’t walk without my rucksack. I was bent over like a grandma, rolling on my hips and ankles, shooting pains, tight muscles. But as soon as I got that pack on my back and the straps done up in that familiar way, fastened securely around my waist, I was balanced and comfortable, and could walk for miles. 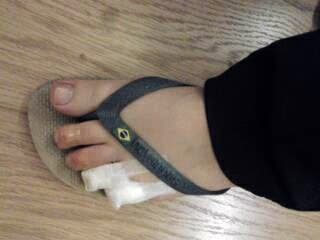 As we walked we collected more people until we were a pilgrim family marching towards Santiago. We shared everything from food to philosophies, advice to medical supplies. The lovely Juan had the ultimate blister busting kit full of different sized needles, alcohol, creams, gauzes and tape. In true pilgrim spirit, he burst my huge bulging blister for me. The experience grew, surrounded and filled every one of us. 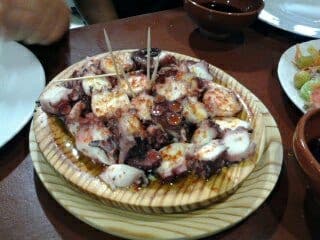 – The local homemade liquor, Orujo, Orujo blanco: clear, pure and lethal in taste and intoxication. Orujo de hierbas: sweet with a woody barrel-smoked taste, delicious but still lethal. Crema de Orujo: served over ice and reminiscent of Baileys and Christmas. This one I really liked, but it’s not the real thing. Not really. After a few chupitos (shots) of this, the afternoon flies by in constant loud toasting to your health, pan y vino y pulpo 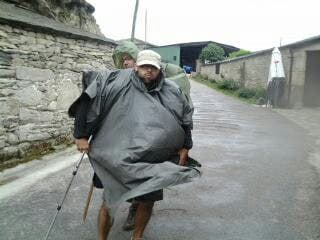 We walked through the first rain in Galicia for a month so there was something of relief about it as it dripped off the quickly revived environment around us. Forever underprepared, I hastily put together a defence. A plastic bin liner covered my rucksack. My walking boots (trainers) were at least sieves against mud and natural matter, if not water. My rain mac had a patched up hole in it and I tied around my white cold face, leaving me looking like a boiled egg in a swimming hat. The typical poncho-clad pilgrim, I was not.

The rain also inspired the learning of my favourite Spanish word: Calabobos. It comes from the verb “calar” meaning “to soak or drench” (fitting) and “bobo” means “silly or stupid”. It refers to fine, spitting rain, and soaking idiots we were. It doesn’t appear in any particular phrase, you just make the comment “calabobos, no?” and everybody agrees with a resigned sigh. 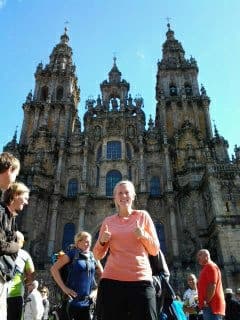 It was cold and infinitely clear as we walked the final 23km to Santiago de Compostela. Our feet moved through that familiar ache as we spotted the tops of the sandy coloured spires of the cathedral, reaching up above the swap of metropolis.

We persisted with cheery buen camino, but it was becoming clear this ritual was coming to an end, now back in the real world. We spilled through the doors of the cathedral with hundreds of other people, gathering around the golden altar in the cool deep nave of the cathedral and breathed.