IN a busy Sevilla street, just yards from the world’s largest wooden structure – the Metropol Parasol – is a large office sign in striking red and black colours.

Hard to miss as you stroll down Calle Imagen, this is the headquarters of the CNT in Andalucia, the still-surviving anarchist trade union.

While largely unknown by the majority of expats and tourists who visit Spain every year, it is perhaps surprising this radical body still exists at all.

But the fact is that the union has now been a key force in Spanish cultural and political history for a century.

And this month – exactly 100 years ago – the prime minister of Spain was shot dead in Madrid by no less than an anarchist.

Premier Jose Canalejas stopped to look in a book shop window on the morning of November 12, 1912, when a man approached him, took out a Browning pistol and shot him at point-blank range.

Canalejas’ killer was Manuel Cardinas, who turned the gun on himself when he realised he could not escape.

Cardinas was avenging the death by firing squad of Catalan anarchist Francisco Ferrer, who, colleagues believed, was found guilty on concocted charges.

At the time, anarchism as a political force was relatively new to Spain.

Introduced into the country by Italian Giuseppe Fanelli in Barcelona 50 years earlier in 1868, the movement spread due to the harsh economic conditions experienced by Spanish peasants, who made up 70% of the population.

The lack of industrial development in Spain meant 52% of the workforce was employed in agriculture. Division of land was the worst in Europe, with 67% of land owned by just 2% of all landowners.

Since anarchism believes in the abolition of all government and in the cooperative organisation of society, it was an attractive alternative to land workers – particularly in Andalucia – whose incomes were so low, they often starved between harvests.

Anarchists believe in anti-capitalism, and argue that the majority too have the right to share power and therefore need to organise themselves to run society.

Spanish anarchists hated the powerful and wealthy institutions of Spain – the Catholic church which owned much of the nation’s wealth, and whose priests lived in luxury, and the army, with its close links to the landowners.

In 1911 the CNT (Confederacion Nacional del Trabajo) was formed to represent the views of the growing political force, which took hold in particular in areas of Andalucia, such as Cadiz, and in Cataluna. 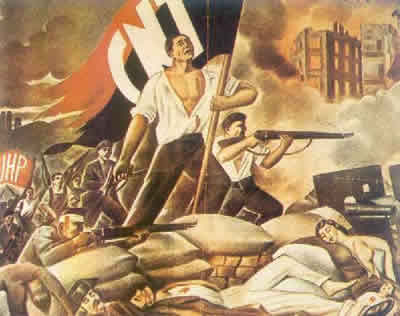 Until this point the only nationwide trade union had been the UGT, set up by the socialist party in 1888, and anarchistic thinking had been confined to individuals and small groups.

This was all to change after the First World War, in which Spain’s neutral stance meant money came rolling in from foreign markets.

Sadly, this did not improve conditions for Spain’s peasant masses, since it was the wealthy landowners who benefitted.

It caused more unrest and a further swelling of the anarchist ranks, with the CNT union counting an incredible 750,000 members by 1919, compared to the 208,000 in the UGT.

It was this year that the ‘La Canadiense’ general strike was called in Barcelona by the union.

Triggered by the sacking of eight workers of a Canadian-financed electrics plant, it started with 140 strikers from the factory’s workforce and ended with the CNT mobilising 80% of Cataluna’s textile industry, with most firms being forced to close.

Although the government reacted to the strikes, arresting some 3,000, in the end employers agreed to enter into talks with the CNT.

As a result, worker’s rights were improved significantly – for example, an eight-hour-day law was introduced.

La Canadiense is thus regarded as one of the most successful working class actions in history.

When the Spanish Constitution was finally born in 1931, there was good reason to be optimistic, with workers believing living standards would improve and land reform would finally be introduced.

But the Institute of Agrarian Reform, which was set up to do just that, did not manage it and conditions led to more revolt.

Press reports at the time showed many people in rural Spain were living on little more than roots and boiled greens.

It led to more unrest and more outbreaks of violence between workers, the police and army.

Few places typify the unrest more than that of Casas Viejas in inland rural Cadiz, then, and still, one of Spain’s poorest regions.

Now better known as Benalup (a new name given it in an attempt to escape its violent past) it was here that the local CNT branch led a uprising in January 1933, which they believed was part of a nationwide call for revolution. 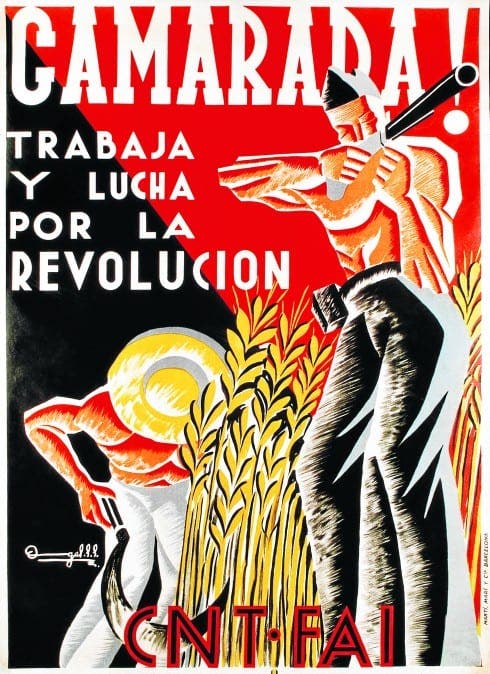 The local militants took the town easily, taking control of the town hall and locking the mayor and local priest in the church while they waited for orders, due to come from Barcelona.

Tragically though, they had jumped the gun – the CNT’s provisional call for a national uprising had been called off at the last minute. The message had not spread as far as this sleepy backwater of Cadiz.

While the uprising in Casas Viejas had initially been peaceful, the much-feared Guardia Civil was sent from nearby Vejer to put it down.

They did this swiftly and violently, killing over 20 local peasants in the process, including women and children and many who had not even taken part ‘to teach the rest a lesson’.

It was a big blow for the CNT and caused much outrage around the country.

There were other similar incidents in the following years and it was perhaps little surprise that by the start of the Civil War in 1936 the CNT counted two million members.

Indeed, it is said that this huge mass of people was the reason that Franco was not able to seize the country in his coup immediately.

“There is absolutely no doubt that the initial response to Franco’s coup was determined by the fact that the CNT and its anarchist ideas held sway among large sections of the working class,” explains Irish anarchist Eddie Conlon.

“There was no waiting around for government ministers to act, the workers took control.”

Anarchism continued to grow in part thanks to Mujeres Libres (Free Women), the anarchist women’s organisation. It counted 30,000 members during the war, with its female members opening centres for unmarried mothers and prostitutes.

As the war rolled on, the peasants succeeded in taking over councils of workers, with anarchists eventually making up the majority of the anti-Fascist forces in revolutionary committees throughout the nation.

In 1936 four CNT members actually entered the national government in Madrid, showing that anti-Fascism could finally get an official voice, if it wanted it.

But, in the end, the working classes did not take complete control of the country – even though the CNT was in a prime position to do so.

The reasons for this are a highly debated topic.

Some claim they were afraid of taking the reins, and that a movement formed by illiterate peasants was not capable of ruling the country.

Others – including those within the movement – say the anarchists simply reached their limitations.

“We did not have a concrete programme,” admitted a member of anarchist group Friends of Durruti later. “We had no idea where we were going.

“We had lyricism aplenty but when all is said and done we did not know what to do with our masses of workers or how to give effect to the popular effusion.”

That said, the anarchist ideal and its basic concepts are still alive today having kept going throughout Franco’s regime, as of course did the UGT.

In 1979 the CNT split into two factions – the CNT/AIT and the CGT (Confederacion General del Trabajo), which was later to became the third largest union in Spain.

Aside from the obvious attraction to its cause by students – its striking red and black flags stand out a mile – it still has much to say on modern Spanish society.

At every demonstration, members of the CNT and FAI anarchist unions are present, with a huge banner (pictured above) leading one section of the general strike in Madrid earlier this month.

Although organised by Spain’s biggest trades unions, the UGT and the CCOO workers’ union, CNT members too were out in their droves and later labelled the strike ‘a success’.

Today, rather than agrarian reform, the anarchists are fighting against Rajoy’s cuts to the public sector and labour reforms – which essentially make it easier to fire workers.

The CNT and the CGT are now small unions who do not have an influence at an industrial level, but their work is still doubtless having an influence in giving the millions of ‘voiceless’ citizens a platform and fighting for causes such as the environment and equal opportunities.

Anarchist ideas are still extremely popular in some parts of Spain, particularly in Barcelona, where groups often gather to squat buildings.

These squats, which are always at risk of being closed down by the authorities, frequently double as social centres where events and workshops are held to share ideas. Some even offer free internet. 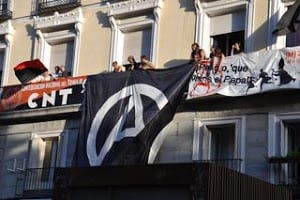 Female anarchists have also been a campaigning force over the last few decades.

At Eskalera Karakola, a feminist squat in the Lavapies area of Madrid which began operating in 1996, women organise activities to fight racism and domestic violence, helping in particular female immigrants to Spain.

Perhaps it is smaller-scale missions, like this, that best suit the anarchism movement…helping people overcome difficulty at a local level and listening to individuals’ tales in order to get things done.

It certainly seems that this sort of direct action is extremely relevant in Spain’s current climate, where half of all young people are unemployed, and up to 500 people are being evicted every day because they cannot pay their mortgages.