THE Spanish pensioner who botched the restoration of a 19th century Ecce Homo painting is flogging her own art on eBay for charity.

Cecilia Gimenez, 80, from Borja in Aragon, made headlines all over the world when she attempted to ‘touch up’ the portrait, by Elias Garcia Martinez – with disastrous results.

Now, a landscape of Borja painted by Gimenez herself can be purchased on the bidding site eBay.

After Gimenez donated painting ‘Bodegas of Borja’ to church-owned radio station Cope in nearby Zaragoza, they decided to sell it online.

Within four hours nine bids had been made on the oil on canvas, pushing up its price to over €400.

And as things stand now, its price is €620 with 30 hopefuls bidding on it.

All proceeds will go to the Catholic charity Caritas.

The paintings join a number of other enterprising sellers on the site who are offering t-shirts, badges and posters displaying Gimenez’s original ‘work’.

While shunning journalists when she first made headline news, Gimenez has since embraced her popularity and will be appearing on Spanish TV channel Neox in the new year. 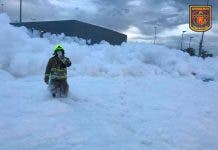 Man in Spain swamped by 4 metre wall of foam