LIFE is made up of key serendipitous moments, which often seem unimportant at the time but somehow magically come together to take you on the merry dance that is life. And never more so than for those wandering souls, who have upped sticks and left the madre tierra in search of the good life in a sunnier clime.

For me it was an impromptu yoga holiday in the Sierra de Aracena that lit the touch paper and gave me the idea of coming to live in Sevilla, but each person has their own unique series of events that have transformed their dream of living in Andalucia into a real life Spanish odyssey.

Take Esther Weekes for instance, a Londoner born and bred, just doing the London thing working as a coach to young people, when in search of a new exciting pursuit she happened to find herself in a flamenco class, and her life changed forever. The seed had been sown, and a passion created from those rare ingredients of joy, an innate talent, determination and courage. So with a year of doing classes in London behind her, Esther decided to live the flamenco dream, and hone her craft first of all in Madrid, then Granada and finally here in Seville.

Ok, so yet another guiri flamenco student hits the wooden floors of the dance academies of Seville. ´So what?´ you may ask. Well here´s the thing, Esther also had another talent tucked up her sleeve, one she wasn´t aware of until one day when she was singing in the toilet in a flamenco academy, someone was so struck by her voice that she was invited to come down to the local jazz club and take part. You see, Esther Weekes sings jazz.

Fast forward a few years and Esther Weekes onetime occasional jazz singer in the loo and student of flamenco is now, Esther – Jazz and Flamenco, regularly performing at the Museo de Flamenco, in the historic city centre. The Museo is a homage to flamenco and usually only frequented by tourists in search of a traditional flamenco show, but this once monthly night (the last Friday of every month) offers something excitingly different for everyone who loves jazz, flamenco or a bit of both. 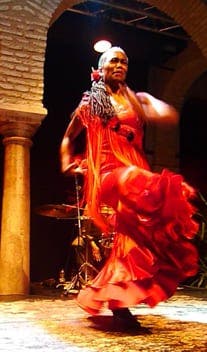 What Esther does is unique. It´s not a fusion of jazz and flamenco, she sings jazz standards such as Summertime and Take Five, to which she also dances flamenco. And she does it with an array of beautiful costumes that play with the two genres and a live band of accomplished musicians. It´s a brave departure in a city that is the spiritual home of flamenco music, but it is one that she passionate to bring to the masses and with her fine balance of talent, beauty, glamour, grit and determination, I have no doubt that she will.