A COMMUNITY of expats is fighting the construction of a six-storey hotel built just 20 metres from the beach.

The EU is now investigating the macro-project that dwarfs over the previous Hotel Santa Marta, which was a low-rise bungalow resort.

Despite the 1988 Coastal Law, planners in Estepona have allowed the mammoth 160 room project to go ahead, even though it towers over a dozen neighbouring villas.

Following complaints from several residents, a town hall technician visited the site in January but is still yet to finish a report on the building.

“I think they are just delaying the report until it is too late and there are six floors already built,” said one resident, who asked not to be named for fear of repercussion.

Other residents of the Benamara urbanisation say they have been forced to ‘live on a building site for four years’, suffering from dust, noise and air pollution every single day.

“The dirt and the noise is just horrible, they’ve taken a plot between what was once such a quiet residential area,” said one British expat.

“It’s just not suitable for the area at all, it looks like something from the centre of Madrid!” she added.

Another elderly home-owner – also English – complained that her privacy has been completely abused by the closeness of the new building.

“I have had to evacuate my bedroom because I could literally touch the hotel wall from my terrace,” said the 80-year old resident.

The original Hotel Santa Marta was a low-key beach resort, which had several hundred protected trees, the majority uprooted.

But according to the group over 130 of them were protected oaks and should not have been touched.

“I think there are four or five of those trees now left,” slammed one local.

But they have refused to give up hope and after construction work began in 2008, campaigners applied to the European Parliament who, in 2009, accepted the petition as an ‘environmental case’ for investigation.

They insist that planning rules only permit two-storey buildings on the plot and that the project violates the 1988 Coastal Law.

The law dictates that any area within 100 metres of the beach is public and not suitable for private development. 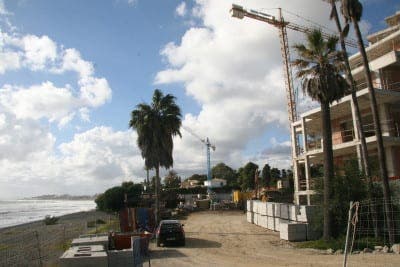 The new hotel ends approximately 20 metres from the beach, replacing what was once a small single-storey chiringuito.

“There are seven five-star hotels in the area already and several bankrupt hotels which are already built, it would have been much cheaper to buy one of these,” said one of the campaigners.

Some of the community have already accepted that the hotel will go-ahead, but many still battle on in hope of recreating the outcome of Almeria’s Algarrobico hotel.

“There are plenty of similarities with the Algarrobico,” said one. “The fact that these arrogant planners and constructors think they can simply ride roughshod over everyone and break the rules is incredible.”

Last year the eyesore in Almeria finally received demolition orders for breaching the coastal law following years of campaigns from Greenpeace and other green groups.