HE allegedly earned millions by persuading unsuspecting investors to part with their hard-earned cash through a series of blacklisted companies in Spain.

Now banned financial advisor Terence Wright is reaping the benefits of his scams by enjoying a luxury lifestyle in France.

The Olive Press can reveal Wright has moved into a sprawling €2 million mansion in the Dordogne region, after spending millions renovating the property.

The British businessman is said to have taken a keen interest in the building work, regularly flying in by private jet to oversee the project.

The property, in Veyrines de Vergt, halfway between Perigueux and Bergerac, has even been nicknamed ‘The Castle’ by locals due to its vast size. 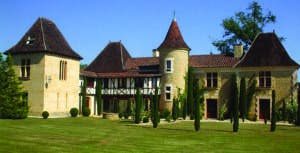 The mansion’s most notable feature is its own stables, which are believed to be for the benefit of Wright’s wife Lesley, who is known to have a keen interest in horses.

He has furnished his lifestyle by buying a second home up the road for staff and two brand new Mercedes cars and a Bentley for him and his wife.

The boss of FSA-blacklisted firms, PFR Services and Cash in Your Pension , told neighbours he has moved because he is sick of Spaniards and Spanish food.

But the truth is his Spanish operation, run out of a house in Alhaurin el Grande, was coming under increasing scrutiny from UK regulators.

“He is a very strange person, very slippery,” one neighbour told the Olive Press.

“The reasons he gave for moving have made a lot of people suspicious, you don’t move to another country at such great expense just because you don’t like the food.”

Another source who worked on the house added: “The renovation has been carried out to the highest and almost incredible luxury standards.

“He loves playing Lord of the Manor and has even bragged to have spent millions on the renovation.

“I’ve seen lots of plush places in my time but this is on a different level.”

The source added: “He is still involved in lots of schemes and has been in and out of Dubai over the last year living the high life.

“He often flies via private jet and usually goes in and out of the UK via Biggin Hill.”

The Olive Press revealed in 2011 how Wright was operating a so-called boiler room in Alhaurin, which cold-called people in the UK and persuaded them to invest in a variety of schemes.

A dossier of his schemes showing he made millions each year was handed to the UK’s Financial Services Authority (FSA).

Despite insisting that he was running a legitimate operation he is not authorised to carry out regulated activities in the UK, including advising on investments.

An FSA spokesman Toby Parker thanked the Olive Press for passing on the documents and confirmed the regulator’s ongoing interest in Wright’s activities.

“The FSA is aware of Wright and is concerned about the type of business he is operating,” he said.

He continued: “You are doing a good job down there in Spain.”

Staff Reporter - 16 Aug, 2022 @ 22:14
GUSTING Thirty mile an hour winds fanned the flames towards a number of villages including Toras, Viver and Teresa. Only a handful of helicopters and...