IT’S been a funny old year weather wise in Seville, literally blowing hot and cold from one week to the next.

Right now I’m wearing a pair of jeans, which on any given year would normally  have been confined to the winter wardrobe. But fear not heat lovers, one thing you can guarantee with Seville is that one way or another the infernal summer will be here with no intention of departing until the end of September. So peeps, if you’re planning on being here in July and August, brace yourselves and get ready to sweat.

So here are my top five tips on staying cool this summer. It’s a public service announcement really, because if you’re new to the city and ignore my advice, you’re on a one way trip to heat exhaustion and hospital.

Please, please, please put any silly idea of doing anything, be it everyday chores or touristy stuff, out of your pretty heads between the hours of 12pm and 8pm. I know that’s practically a whole day, but that´s just how things roll in these parts. If you head out on to the normally bustling Alameda during these no-man hours, you´ll be greeted by only the hardiest of cerveza drinkers (insert alcoholics here) and maybe some passing tumbleweed.

Anyone who has any sense (and air conditioning) will conserve their energies until the streets have started to cool down, which can be as late as 9 or 10pm. Long siestas are of course obligatory, which will leave you fresh and ready to enjoy the hopefully cooler summer nights.

The powers that be in the city understand this, and lay on a whole season of cultural events to entertain the folk who for what ever reason haven’t abandoned ship and headed off to the beach. The picturesque gardens of the Cartuja monastery play host to ‘Nocturama’, a series of live concerts featuring up and coming pop, indie and electronic groups from around the country. Starting at 9pm every night and costing just 6 Euros, it’s like a mini festival every Thursday and Friday from the end of June until the beginning of September. http://www.southpopfestival.com/nocturama/

If you want something a little more civilised then check out the ‘Noches en los Jardines del Real Alcázar´ which are 75 concerts over 75 nights. The music covers many musical genres from the city’s eponymous Flamenco to Baroque, classical, world music and jazz. The setting is enchanting, and is a chance to visit the stunning gardens while basquing in the melee of exotic aromas such as jasmine and and lady of the night, all again at a very reasonable 6 Euros. http://www.actidea.es/nochesalcazar2013/

The Centro de Iniciativas Culturales de la Universidad de Sevilla (CICUS) also get in on the act with their summer programme of music and open air cinema, which has a cooler, hipster vibe.http://cicus.us.es/21grados2013/

In a Seville summer the River Guadalquivir becomes a place where those that haven’t made it to the beach can fool themselves into forgetting that they live in what is affectionately known as the ‘frying pan of the world’. Those of you who have followed my blog from the start or who live on Spanish shores will be familiar with the term ´Pijo´, which is roughly translated as preppy or sloany, and from what I can tell a lot of the bars by the river tend to be the natural breeding habitat for this variant of the local population. But don’t let this deter you, there are some stunning spots where you can sip on your ice cold beer or overpriced Mojito, while staring across at the beautifully lit Giralda or Golden Tower. Head to any of the bars on Calle Betis in Triana or if you fancy a bit tropical greenery with your cocktail Puerta de Cuba seems to hit the spot. http://www.puertodecubasevilla.com/en

Alternatively if you really can’t face donning a Ralph Lauren shirt or getting out the hair straighteners, you can just grab a few litre bottles of beer or mix up some tinto de verano, and pop down to the river on the northern side between Plaza de Armas and Triana bridge and do ´Botellon´, which is getting squiffy with your mates outside in a public space, in this case by the River. It tends to be a bit of a studenty activity and is in fact illegal, but if you really want to do as the Sevillanos do, then you’ve got to give it ago. You’ll know when it’s time to go when the police arrive or you hear the drone of ambulance sirens here to carry off the underage drinkers who’ve overdone it on the litronas.

I know they say heat rises, but in Seville in summer, life happens on ´Azoteas´ which are the roof terraces. Any hotel worth its salt has one, most apartment buildings do too, as do municipal buildings.

If you’re a tourist you’re in luck, because hopefully if you’ve been prudent enough to check into a hotel with a pool, you’ll be able to lounge around under a sombrilla, while drinking something wet and ice cold. I’ve heard of some locals booking into a hotel if they’re stuck in Seville for the weekend, just so they can join in the poolside activities, because for some reason, elsewhere in Seville, public open air pools are decidedly thin on the ground. But if you don’t happen to be a patron of the hotel, you can still drink in their terrace bars, and the city’s jewel in the crown seems to be the decidedly hip EME hotel, whose roof terrace is within spitting distance of the cathedral. You pay for the privilege in the bar prices, but the EME isn’t the only hotel with a roof terrace in town, you could also try Casa Romana on Calle Trajano, if you want something a little more low key.

Many of the city’s cultural activities happen on multitude of roof terraces, such as the annual Entretejas series, which organise live music events, cinema screenings and poetry recitals throughout the summer months. http://entretejas.org/ Or if you just want to have a drink on a roof, head to La Trompeta Verde, which overlooks the much missed Corralones en Calle Castellar, and mixes a Terraza with a more Perro Flauta/ bohemian vibe. https://www.facebook.com/trompeta.verde 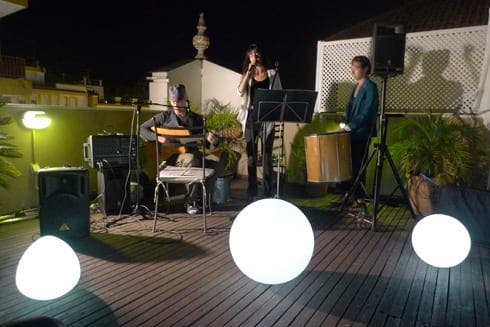 4. The Moors weren’t stupid you know

Before I came to Seville I had no idea how ingrained in the fabric of the city the Moorish influence was. It was after all part of the Al Andaluz kingdom for 500 years, and the city’s architecture remains the most noticable reminder of this time.

The Moors were big on water features, through which they created their own little gardens of paradise, and the gardens of the Royal Alcazar Palace are testament to this. You can spend hours mooching around from one shady corner to the next, reading a book or imagining the city’s pre-christian history. If it’s too hot to visit during the day, you can check out the night time visits which also include a guided tour, with theatrical enactments representing historical events that happened within the palace walls. http://www.alcazarsevilla.org/

Or, while we’re on the topic of water and moorish times, you could head to the Arab Baths. I know this sounds slightly counter intuitive, why on a dehydration inducing, boiling hot day, would you choose to hang out in the some steam baths? But seriously, it’s an option to consider, because firstly it’s one of the most relaxing places I’ve ever visited, where everyone pads around talking in hushed tones while immersing themselves in baths of scented water, and more importantly inside you can forget about the hellish heat that awaits you on leaving. http://www.airedesevilla.com/

If you don’t live in a house with air-con, find a friend who does. My house doesn’t have it, that’s one reason I leave the city from July onwards. Sleeping at night with a stupid old fan just doesn’t cut it. But one place that you can guarantee some a reprieve is inside the cinema. I imagine as readers of this blog, you probably won’t fancy watching films dubbed into Spanish, so you’re best heading down to the only original version cinema in town, The Avenida 5 cinema. They don’t do blockbusters, so you’ve got to be more an art house indie type, but when desperation strikes and you can’t stand the heat any longer, get out of the kitchen and head to the movies.

So there you have it. With this, you will survive the heat, remain hydrated or should I say lubricated and be culturally enriched. Result!