IT caused outrage when the Spanish rapist of 11 children in Morocco was officially pardoned after just two years in jail.

But now convicted paedophile, Daniel Galvan Vina, has been arrested on his arrival in Spain.

Vina, who was sentenced to 30 years in prison for filming the rapes of the youngsters, was picked up in Murcia, where he used to work at the university.

His official pardon by King Mohamed VI of Morocco, led to a series of violent protests across Morocco at the weekend.

There were claims that he was a spy and that his release had come after high level pressure from the Spanish authorities.

It has since emerged that the 64-year-old was not meant to be pardoned, but instead sent back to Spain to serve the remainder of his 30 year sentence.

According to the Spanish embassy in Morocco they produced a list of 18 people who they approved for pardon, and a further 30 who they wanted sending to Spain to serve out their sentences.

Vina was in the second group – but Morocco mistakenly pardoned all 48 prisoners.

The growing public concern prompted the king to revoke the pardon stating that he had been unaware of the nature of the man’s crimes.

“His Highness would never have consented to the release, in light of the atrocity of the monstrous crimes,” said the palace.

Vina was arrested in Tetuan in 2011 and later told a judge he had raped the children ‘because they are cheap, and you can get hold of anything with the right money’.

Vina, who was born in Iraq, moved to Spain in 1976, where he worked at the university of Murcia and claimed to be a professor.

He moved to the Moroccan port city of Kenitra, 25 miles north of Rabat in 2005 before carrying out his despicable crimes. 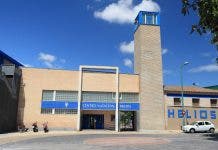