“PLEASE don’t take her photo,” I pleaded, as we passed a fetching russet-brown cow, grazing in a field along the coast road to Zahara. “I can’t look her in the eye in case we might be eating her daughter later.”

I’m one of those hypocrites who doesn’t like bullfighting but loves beef and Dave and I were on our way to the IV Ruta del Retinto to eat it 30 different ways!

If it can be turned into a fiesta, the Spanish know how and the trades folk of Zahara really milk it with their culinary homage to a humble brown cow: el retinto, a hardy little bovine indigenous to the Sierra de Retín in Cádiz Province that thrives on hay and acorns during summer droughts, giving the soft, lean meat its distinctive nutty flavour.

The four-day fiesta, a ‘carnival’ in its truest sense (carne = meat) is beefing up local tourism by stretching the season out to the end of September. Some 20,000 visitors come to taste the culinary creations dreamed up by 30 different restaurants in artfully-presented tapitas: retinto ravioli, retinto mille feulle, retinto fried, fricasséed, flambéed and flaunted atop a scoop of savoury sorbet! If you eat 12 and get a form stamped at each restaurant you could win a colour TV or a tablet. It’s the same recipe for success as the Zahara Tuna Festival which netted 800,000€ last May.

It’s a great day out if you like socialising while you scoff! “Have you tried the one that looks like a Walls Feast lollipop?” I asked a couple from Toledo as we munched on a miniature beef burger, served in a scarlet bun with a ‘false egg’ of mustard and mayonnaise on the side. “We can recommend the Sorpresa Esferica”, interjected a group of tourists from Frankfurt. Happily, this ‘spherical surprise’ was not what it sounds like (the meat comes only from yearling cows, not bulls). It turned out to be a little Scotch Egg. For €3 including a beer, wine or soft drink, you can’t go wrong.

As a sideshow to this pub crawl with (cow) bells on there’s beach horseracing and polo, played out on a miniature arena where you can get close enough to the riders to see the whites of their ponies eyes as they flash past the flimsy fence, waiving their mallets like machetes.

From the colour-coded map that guides you around to the helpful waiters, resplendent in polo shirts to match, the Ruta de Retinto is one slick operation, masterminded by a chap who’s a one-man tourist board in Zahara: Gaspar Castro, President of trade association, ACOZA. And wow has he put this pretty seaside pueblo on the map. The Tuna Festival will be six next May and, for his next trick, he’s talking pork to the neighbouring province of Huelva in a bid to launch a Ruta de Cerdo Iberico.

Alas, later the same day my worst fears were realised when I locked eyes with the living versions of what I’d so recently eaten…There was a corral of them – cute retinto calves with long lashes and soft russet fur, stumbling about on stilt legs, suckling from their mums – and I felt a very sharp pang that wasn’t caused by indigestion. But then, I’m just a soppy old animal-loving guiri! 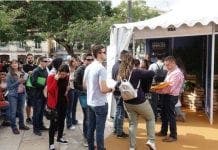