A WOMAN has been left red-faced after a video of her busting moves before being swept up in a huge wave has become an internet sensation.

Video footage shows her in a black swimsuit on Sardinero beach, casually skipping along as the surge of water quickly approaches.

She was filmed with two other friends as severe storms battered Europe’s Atlantic coastlines on January 6.

Realising that her dancing isn’t going to stop the massive force barreling towards her, she tries trotting over to safety but is caught in the wave instead. Her friends, who made it to a concrete ramp, can be seen looking on as she is carried away.

‘I would venture to say she learned her lesson,’ said one viewer.
‘Why be anywhere near such a dangerous situation let alone skipping in it?’ another added.

It is understood the woman was rescued and suffered just a few bruises. 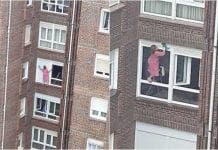 Lydia Spencer-Elliott - 12 Aug, 2020 @ 11:09
A FUGITIVE allegedly responsible for the largest robbery ever carried out in Gibraltar has been hauled back to the rock more than...