THE publishers of the Euro Weekly News are due in court in Almeria this morning in a libel case.

The owners of the publication – that claims to be Europe’s leading free newspaper – are seeking damages against journalist Lenox Napier.

Steven and Michel Euesden are also demanding that Napier is sentenced to two years in prison for a series of blog entries claiming they had ‘stolen’ their newspaper off him.

Almeria-based Napier, who runs a website The Entertainer, claimed the couple – a former nightclub owner and double glazing salesman – failed to pay up after a ‘staff buy out’ in the 1990s.

He claimed in interviews that the paper suddenly changed its name without agreement to the Euro Weekly News in 2002.

The Euesdens, from Manchester, had joined the Entertainers’ sales team in the 1990s.

Despite already successfully silencing his section Weeniewatch, about the paper and its owners, the Euesden’s are expected to tell Almeria Penal Court 4 how Napier has consistently libeled them.

The couple famously appeared on the Piers Morgan documentary on Marbella claiming that disgraced former mayor Jesus Gil, a convicted fraudster, was like a ‘Robin Hood’ figure. 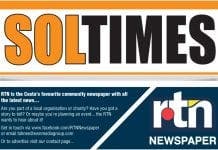