BRITISH cycling hero Bradley Wiggins will be pedaling through Andalucia in February on the Ruta del Sur for the Vuelta a Andalucia tour.

The 2012 Tour de France winner and Olympic gold medalist will race with Team Sky, beginning the five day event in Almeria on February 19.

The other stars of the tour include fellow Sky cyclist, Australian Richie Porte and Movistar’s Alejandro Valverde.

The cyclists will race through Vélez, Málaga and Jaén on February 20, before La Guardia de Jaén and Cabra on the 21st.

On Saturday 22nd Wiggins and co will battle it out through Sanlúcar La Mayor and Sevilla.

The final day, Sunday 23, will see them soaring through Ubrique before eventually finishing the tour in Fuengirola. 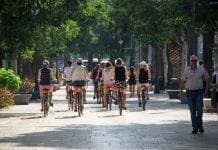