SPANISH police have released more information about ‘an artist’, who could prove to be one of Europe’s biggest ever forgers.

The 60-year-old man, who detectives describe as a ‘real artist’, was picked up at his house in Toledo, surrounded by fake €50 notes.

“It would be easy to fool anyone with these bills. They’re very well done,” explained a detective, adding that the man was a self-taught graphic artist who had previously worked in the printing business.

He said: “This type of counterfeiter has a big ego and a big drive to excel.

“Logically they keep trying to outdo themselves because its an illegal product and the better it’s made, the more popular it will be on the black market.”

Following a year-long investigation, officials from Spain’s national police and Europol detained the man in the garage of his house.

Police said the quality of the man’s bills – and the sheer volume he produced – had made him one of the top counterfeiters in Europe.

Police were able to recoup notes worth €310,000 and there are believed to be millions of euros of fake notes on the streets.

The garage of the man’s modest home had been turned into a workshop, with every inch of its cramped, messy space filled with printers, stamps and ink cartridges.

Police also seized a home-made oven, described as a type of microwave, designed to dry the counterfeit notes.

Full pages of printed-out €50 notes sat on a worktable, waiting to be cut. Crumpled-up printouts of rejected notes sat in the rubbish bin.

Along with his signature €50 notes, police found stacks of dollar bills, which will be sent to the US for further analysis. A box full of printer paper was also seized, with the heads of former American presidents embossed several times on each page. Police say the man also falsified passports for various European countries.

Four others were arrested as part of the operation, including the man’s 45-year-old wife. The three others, said police, worked to introduce the counterfeit notes into the economy.

More arrests are expected in the case, as police believe the man worked with a team of about 30 people. 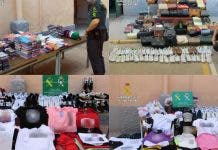 Kirsty Mckenzie - 2 Mar, 2021 @ 14:26
CELEBRITIES often snap up homes all over the world, from sprawling mansions in LA to penthouse apartments in Paris.