CARLA the rescue dog got more than she bargained for when she embarked on a duck chase while out for a morning stroll.

The five-year-old labrador/mastiff cross launched herself into La Quinta Reservoir, in Nueva Andalucia, ignoring the ‘no swimming’ signs and screams from her owners Yiannie Lamb and Kirsten Fleig.

The next minute she was gone.

“She just disappeared and we had no idea what had happened,” Yiannie, head of a local film

The couple then spent the next four days fruitlessly searching the nearby countryside, but they could never have imagined what had actually happened to Carla.

It turned out she had been on the log flume of her life.

For the reservoir provides water to ANOTHER reservoir, that of La Concepcion some four kilometres away, via an underground pipe.

And when the levels in the second reservoir get low, a hatch automatically opens in La Quinta, sending water rushing along the tube to its destination.

As Carla was determinedly swimming after the ducks, the hatch opened, sending water, logs, mud, rocks and (you would imagine) a rather startled 40 kilo dog shooting down the tube!

“Judging by the state of her paws she must have clung onto a log for dear life,” continued Yianne. “She lost all her claws on her front paws”

Carla was finally spotted, looking more than a little disorientated and disheveled by security guards on the La Concepcion dam, four days later.

“We were delighted to get her back, but it’s a reminder that all dog owners and people with children too, should look out for ‘no swimming’ signs”

As for Carla, she is genuinely fine. “Apart from the fact that she did a four kilometre bobsleigh ride on her paws she is fine” grinned Yiannie.

“On her first night back she slept flat on her back in the lounge, snoring like a viking!” 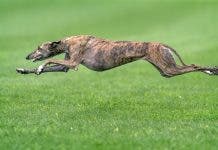 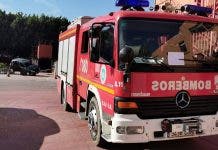