SHOP owners in Barcelona’s Portal del Angel are forking out some of the highest rents in the world.

Businesses must shell out a staggering €3,180 per square metre per year, making the street the 15th most costly in the world.

Another Barcelona street, Passeig de Gracia and three in Madrid, including Calle Serrano and Calle Jose Ortega y Gasset come in the Top 100.

Spain’s second most expensive street however is Calle Preciados in central Madrid, costing €2,880 a square metre.

In Andalucia, Malaga’s Calle Larios came in at 145th in the poll costing €1,740 per metre squared, while Calle Tetuan in Sevilla costs €1,440 per square metre.

The study was carried out by Cushman & Wakefield as part of their annual Main streets across the world report.

The real estate giant studied rent prices of the 333 most expensive shopping precincts in 64 countries.

Hong Kong’s Causeway Bay is the world’s most expensive, at €24,983 per square metre. 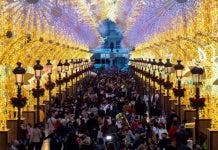