GIBRALTAR Football Association has unveiled the design for a brand new UEFA-standard stadium, with full medical and media facilities as well as community spaces.

However, the 8,066-seater will not be ready for when the Rock hosts Germany’s footballing superstars in the coming Euro 2016 qualifiers.

Instead, Gibraltar will play their first ever qualifying games in Faro, in Portugal, as they take on a difficult group including Germany, Republic of Ireland, Poland, Scotland and Georgia.

During the draw in Nice, they had to be moved out of Spain’s group because of political tensions between the two countries.

UEFA had announced prior to the draw that the two nations would be kept apart, as well as Armenia and Azerbaijan, who went to war between 1992 and 1994 and still have territorial disputes.

The stadium, to be built on a currently barren piece of land at Europa Point,  will also be used for concerts.

The designs are currently being exhibited in the Gustavo Bacarisas vault in Casemates Square where the public can make submissions before the project is finalised. 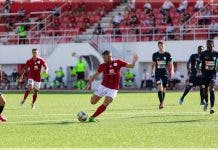 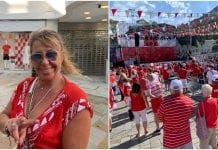