FOUR brothers, aged between three and 12, have been killed in an apartment fire which broke out last night in the Tarragona province.

Four other family members were also injured in the blaze, in the town of El Vendrell, including the children’s father.

Fire fighters were able to rescue the children’s mother, with her two-year-old baby in her arms.

“We will not speculate as to the cause of the fire,” said the Minister of the Interior, Ramon Espadaler, from El Vendrell.

“The parents know that they have lost four children, and are currently receiving psychological support,” he added.

Emergency services were called to the fire, which broke out on the top floor of a four-storey apartment block on Calle del Mig, at around midnight last night.

Seven fire crews were mobilised, but they found the fire had already consumed most of the apartment.

Fire fighters found the bodies of the four children, aged three, five, eight and 12, inside the apartment.

The children’s father, who suffered second degree burns to 11% of his body, was taken to Hospital d’Hebron in Barcelona, where he is described as being in a serious but stable condition.

The other family members, who received more minor injuries in the fire, have been taken to the hospital in El Vendrell.

Other residents in the apartment block were evacuated as a precaution, but most have now been allowed to return home.

Further information about the cause of the fire has not yet been disclosed. 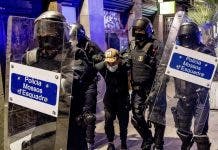